A few years ago we were on a road trip, as we very often are.

With all the possible flight connections that could make our life easier, saving an enormous amount of time, whenever we can, we still choose to drive. I actually enjoy the road trips. There is so much to see on the way and one is totally independent and self sufficient. Moreover, I tend to bring a lot with me back home, and I am not referring here to clothes or shoes. Theses days it is all about the food and unique produce that is hard to buy locally or take on a plane, not to mention the wine.

A moderate quantity of it will find its space in our car but anything over six cases we ship home.

I also feel sorry for the car carrying so much weight on the return journey.

Well, we were heading to Switzerland from The South of France and we had to stop somewhere overnight. I chose a region that I had never been to before. Iâve heard of its grand red wines (Barolo, Barbarescoâ¦and a couple of well known producers that are the main choice of Londonâs so called upmarket social scene) and the very much prized white truffle from the province of Alba.
At that time I didn’t know Italy that well (after a couple of years in Italy I am still discovering new places and learning constantlyâ¦.but time works its magicâ¦.many things just make more sense and are easier to comprehend now) so I could not think of a better excuse to finally go to Piemonte.

It was almost the end of summer, warm, sunny and the vines of precious nebbiolo grapes almost at their prime getting ready for the harvest the following month. By pure mistake (we wanted to arrive to our splendid agriturismo at a decent time) we took a convoluted country route. This time I was thanking the sat nav for it because the introduction to the area was just breath taking, with all the farms and architecture that takes you back in time to the film â1900â (Novecento, âTwentieth Centuryâ), an Italian historical drama with its iconic cast of Robert De Niro and GÃ©rard Depardieu.

Since then Piemonte has become a place for a yearly pilgrimage, a couple of pilgrimages a year in fact. The wine we buy is mainly shipped, it never seems to be enough.
On the first night we ate on the beautiful terrace of our agriturismo. It was here that I was introduced to âtajarinâ pasta with porcini (ceps) muschrooms and advised not to add Parmesan cheese so it will not get in the way of the glorious and earthy aroma of the mushrooms, cooked to absolute perfection. âTajarinâ is a piemontese version of humble âtagliatelleâ (made of simple ingredients: fine flour 00, water and some eggs), famous for an astonishingly high ratio of eggs (sometimes just yolks), which results in rich, decadent pasta.

In the past, âtajarinâwas often served with a sumputous ragu of offal from home-raised poultry and rabbits, which is so typical of âLa cucina povera” (poor manâs food using the humble resources available). A more simple way of preparing it, not to be confused with lesser Piedmontese, âtajarin” is served with butter and sage (my small twist on it is to add toasted hazelnuts and just a touch of grated lemon zest), or with wonderful porcini (ceps) mushrooms or with the regionâs legendarily prized white truffles from Alba.

I donât think it is appropriate to use the term: âItalian cookingâ.

Instead, âthe cooking of Italyâ and of its regions seems to me to a better definition of the true Italian food culture.

At first I would look at the fact that Italyâs sovereign states (having no common language, sharing few cultural traditions with practically entirely distinct styles of cooking) were only united in 1861.

The contrast of Italian regional food is further sharpened by the two dominant aspects of the landscape, the mountains and the sea, and of course the climate which plays a very important role.

At the footsteps of the Alps lies Italyâs major plain, which spreads from Venice (Adriatic coast) westwards towards Lombardy and into Piedmont. This is the dairy zone of Italy where the fat used for cooking is butter and the staple cereals are rice for risotto and cornmeal for polenta.

Piedmont, isolated by mountain ranges in North West Italy, has developed a strong regional identity that is reflected in continued use of its own dialect and a unique local cuisine, cuisine unlike any other Italian region. It is rich, it relies on lard and butter rather than olives that donât grow well in this climate. Although having said that, these ingredients bring silky texture and hearty aromas. Local meats, game and root vegetables are cooked on a low heat for a long time, slowly developing and releasing flavours as well as giving deliciously rich, tasty character to the food of Piedmont.

The cuisine is simple, tasty and its flavours stand out simply because the ingredients are delicious and of prime quality, they are sincere and uncomplicated.

It is said that Piedmont is best enjoyed during the autumn months, when the forests are at their most colourful and a heavy fog starts to settle over the land.

I think the scenery is wonderful all year round, and in spring, just couple of weeks agoâ¦ I did not miss the haze. 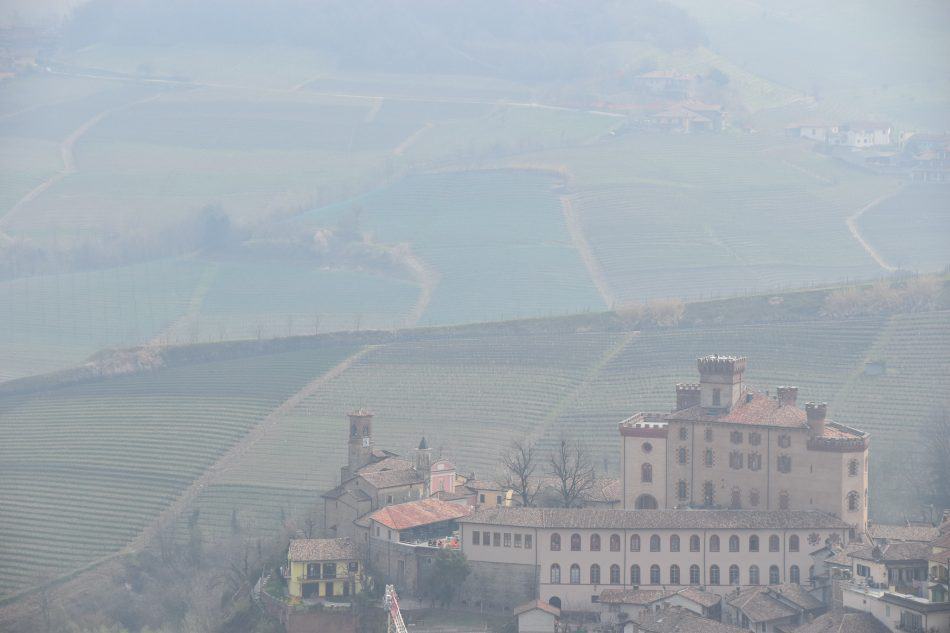 The region is known for being the home of one of the most antique and precious cattle breeds called âla piemonteseâ. The meat is tender, soft and delicate. You eat it slowly and gently cooked in red wine from the region, or as a part of âbollito mistoâ (a platter of boiled meats where you can find such cuts as tongue, served with a green sauce called âsalsa verdeâ).

In Northern Italy veal is readily available and in Piemonte a portion of raw beef tartar prepared with a knife with some shaved parmesan or egg yolk is a staple dish. Having said that, we canât forget the famous âvitello tonnatoâ, thinly sliced cooked veal with a tuna sauce, and that is a different dish to the one of a similar sounding name âvitello tonnÃ¨â (where tuna plays no part).

After my latest trip to the region, I decided to make a lesser known version of veal rolls where you use an egg as a part of the filling , Veal rolls with ham and eggs / Involtini di vitella.

The recipe is loosely adapted from a book which renews the respect for tradition and memories of the tastes of another time. 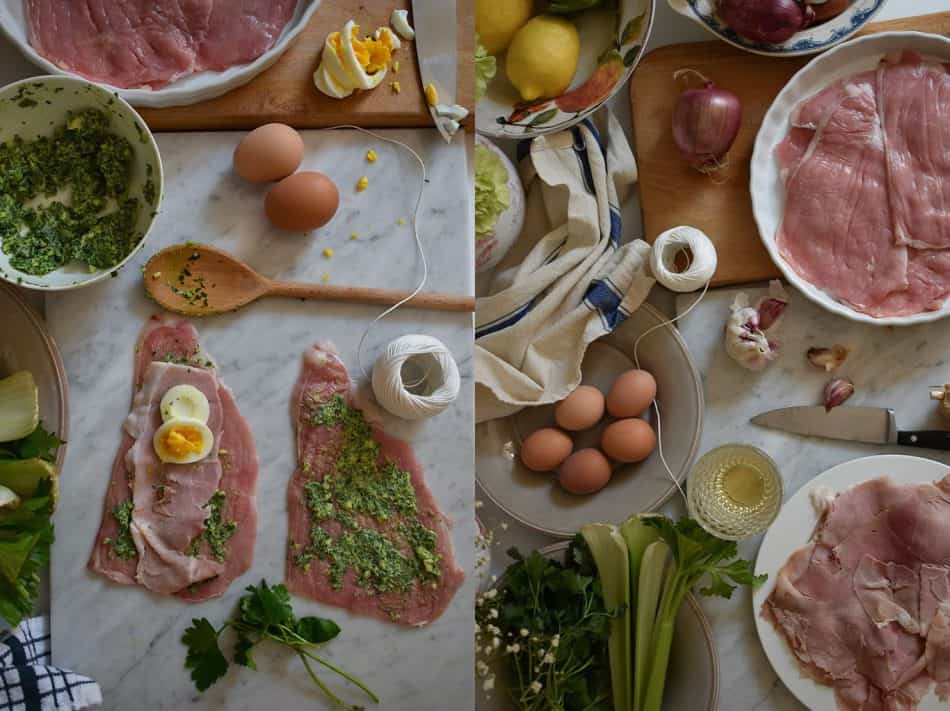 The region is prized for its cheeses many with the DOP denomination like castelmagno which I use for risotto with red wine (I usually use Barolo but also Barbaresco, Barbera, Dolcetto), gorgonzola (where Piedmont shares its denomination with Lombardy), robiola and toma piemontese. To the red wine risotto I also add toasted hazelnuts from Piedmont (IGP) with their very refined, persistent taste and crispy flesh.

Piemonte has not only stolen my stomach but of all wine regions has also stolen my heart.

In the meantime our wine collection has been growingâ¦. I am contemplating life while enjoying this red liquid of Gods and thinking that the wines of Piedmont will need a new space on Hai mangiatoâ¦..I am reassured of that fact after having another bite of a cookie (made with the addition of corn flour), another spoon of âzabaione with the addition of Moscato dessert wineâ and everything is brought together by a glass of chilled Moascato dessert wine, from Piedmont of course. 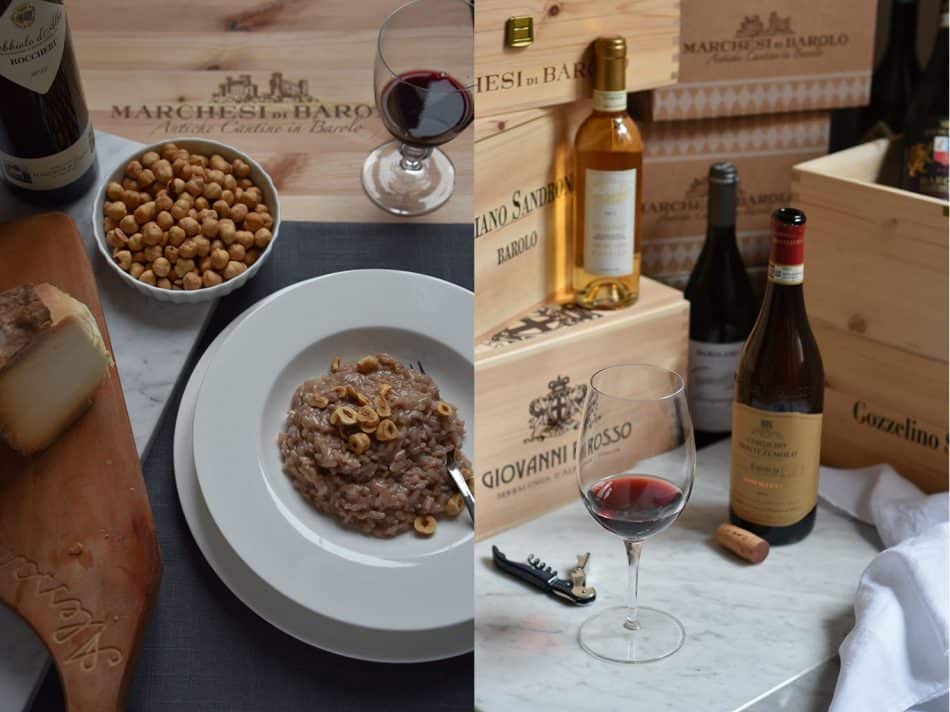 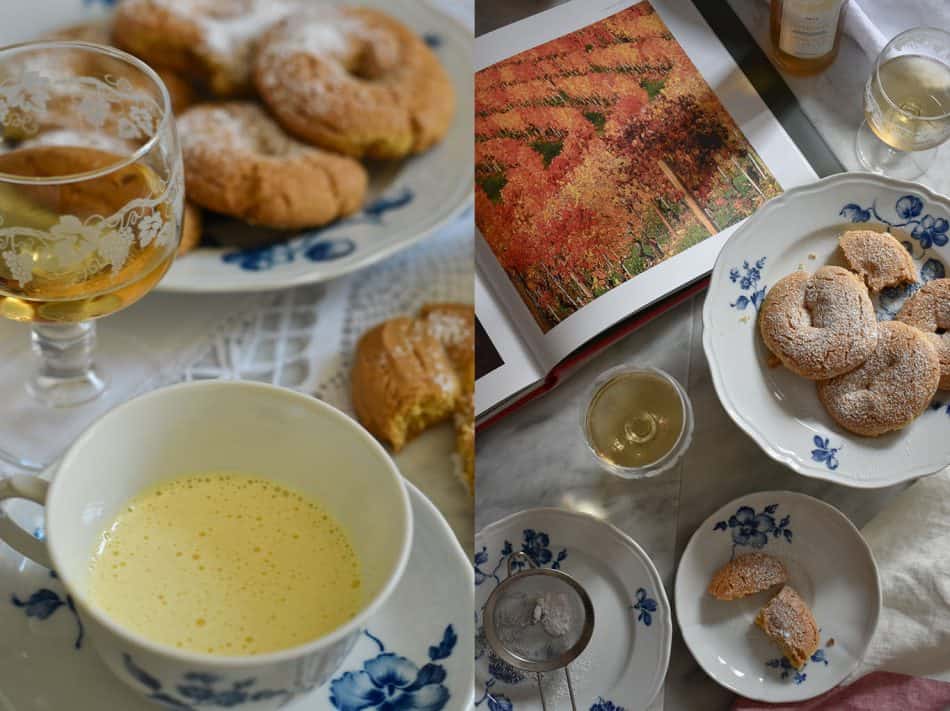