Take me back to Sicily (Part 1) 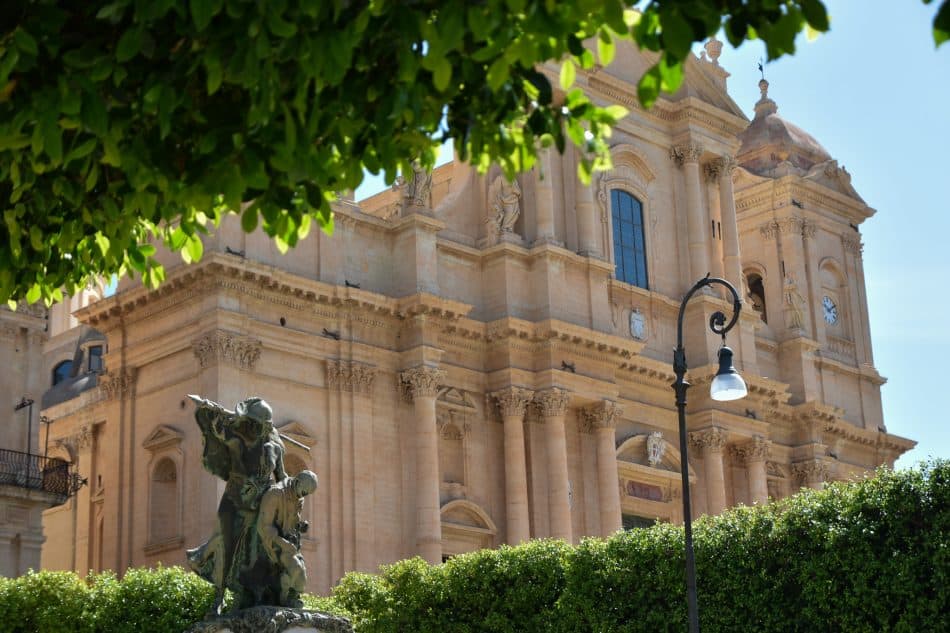 Every time I go to Sicily I am simply astonished by itâs food and before leaving the island I am already thinking about what will I eat and try upon my return. The flavours are bold and intensive, just incredible, dare I say addictive. The flavours in mind here are not only the expression of how individual ingredients are put together on a plate but the exquisite flavour of the ingredients, tomatoes from Pachino (IGP), so sweet that you will not want to have any other, broccoli, almost growing everywhere, yellow and green lemons (not limes), oranges, olives, almonds to name but a fewâ¦

The Sicilian food, âLa cucina sicilianaâ, that we know today is a fruit of a very long process of transformation and the gastronomic influences of diverse cultures that approached the island in the past.

The first wave of people to invade Sicily were the Greeks, then the Romans, the Arabs (sweet and sour influences), the Normans and the Spanish. After that there were the French (bringing chefs from Paris and cooking the fashionable French food of that time) and the Austrians.

Sicilian cuisine is expressed in the baroque, baronial cooking of the Sicilian nobility on one part and the other in âla cucina poveraâ, poor manâs food where you have to be clever and creative with the ingredients available, but above all the biggest influence on Sicilian food has been itâs territory, the land, the mountains and the sea.

Many cultures introduced their produce to the later Sicily, but ultimately it is the terroir that decides what can grow.

Sicilians prise fish and shellfish above meat. Tuna and swordfish (âPesce spada alla Messinese” ,Swordfish Messina style) especially are a staple dish. Once available in abundance, sadly due to overfishing that is no longer the case. Of course we canât forget about prised red prawns (best eaten raw) coming from the cold waters of Southwestern Sicily.

The fact that there are âthousandsâ of variations of the same recipe (and there are plenty of them) and of course each one of them is the best, it sparks off endless animated conversations about ingredients and the methods of execution. Due to the above, it is not an easy task to tell the story and introduce the recipes of such a complex and diverse island.
But like with everything, one has to start somewhereâ¦and I only share here the dishes that I particularly like, that I make often at home or I am inspired by, creating âmyâ own version of them.

I think that one can envy how Sicilians very harmoniously and skilfully put on the plate what comes from their land and sea. Almost as if wanting to say, what grows together goes well together, a perfect match.

Certain flavour combinations may initially, or at least during the first visit, seem a bit odd, but after immersion in the Sicilian food culture, these flavours will seem fantastic and extraordinary. Sicilians mix very well swordfish, sultanas, capers, breadcrumbs, wild fennel, sardines or tuna with Marsala wine in a pasta dish that I tried in the Island of Ortigiaâ¦and still canât forget about it. 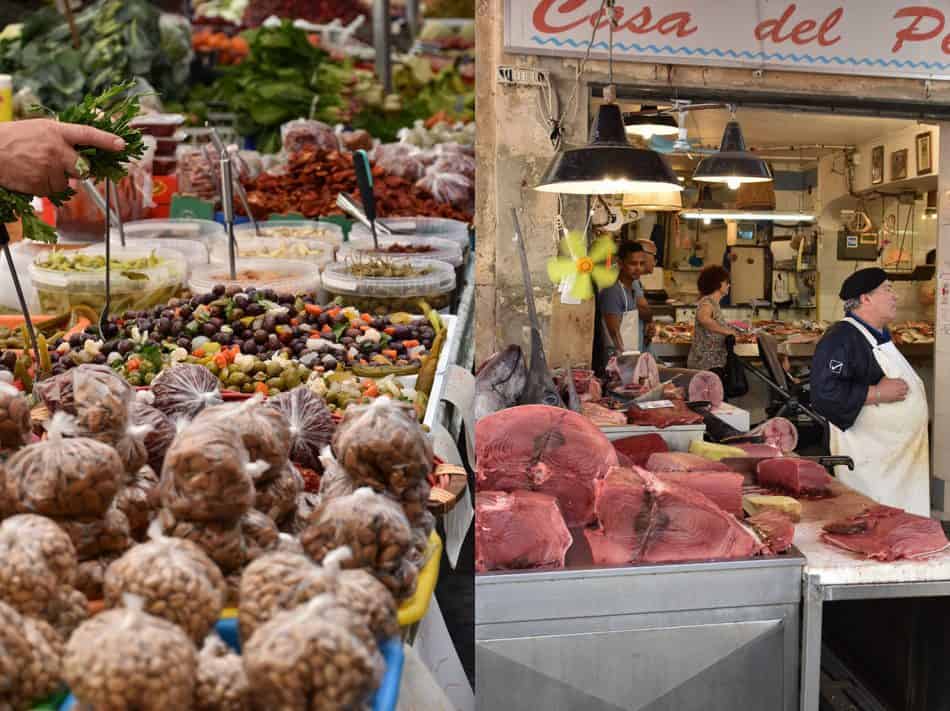 Throughout the whole period while oranges are in season I prepare an orange salad / insalata di arancie, which is a traditional Sicilian dish. I serve it either as a part of antipasto or a side dish, for me there is an unwritten rule that this salad can be served literally with everything.

Of course there are many variations of the orange salad, I usually add to the sliced or cubed ripe oranges: olives, thinly sliced red onion and occasionally sliced fennel. I always have in my cupboard a jar of very fragrant dry Sicilian oregano that I sprinkle on top of the salad. A generous glug of extra virgin olive oil makes the dish come together. When I serve it along Pantelleria-style salad (using very best capers from Pantelleria, olives, tomatoes, red onion and potatoesâ¦) and grilled or baked fishâ¦for us the meal turns into a feast. 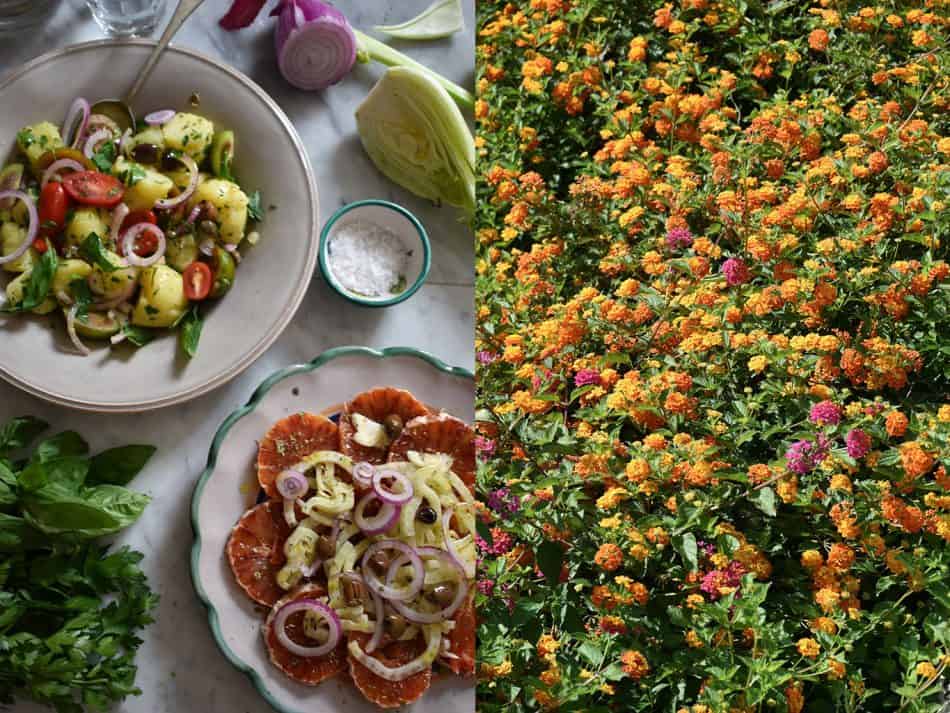 While across the whole of Italy almonds (mandorle) are used in cakes, tarts, amaretti biscuits, almond paste, marzipan and Amaretto liqueur, in Sicily they are also used in savoury dishes, for example in âpesto trapaneseâ (tomato and almond pesto) which subsequently can be added to meat, fish and pasta dishes.

We have fallen in love with this pesto. First, I roast the almonds, then gently grind them in a mortar with some garlic, peeled tomatoes (tomatoes have to be ripe and sweet ), then I add some fresh mint and of course olive oil. 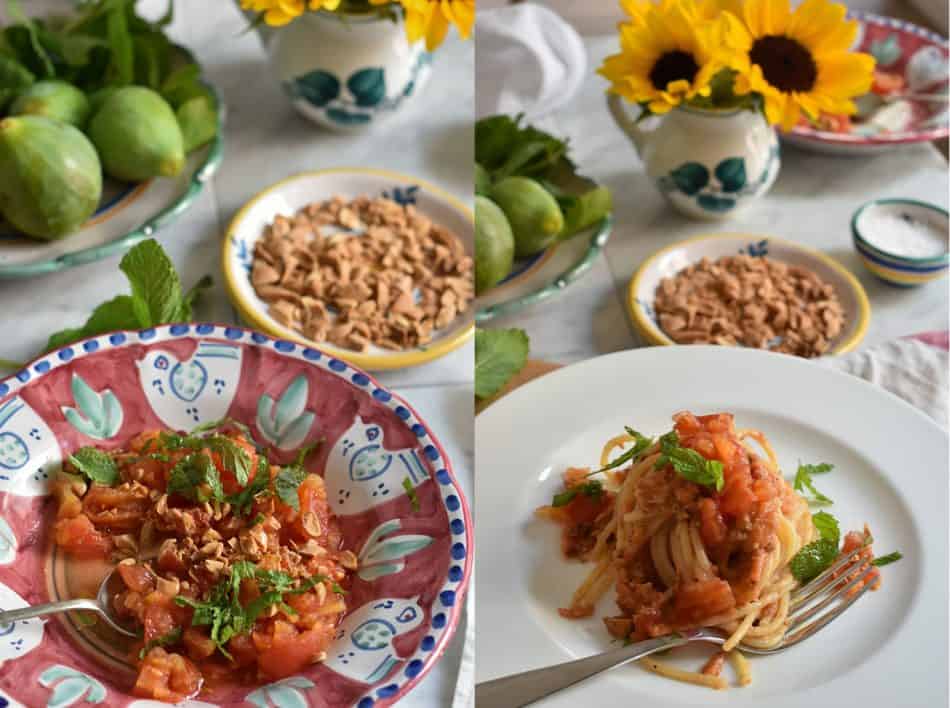 A pasta dish, the first Sicilian dish I made even before exploring the island, is â pasta alla Normaâ with aubergines, tomatoes, salted ricotta and âmalfadineâ type pasta as my personal choice.

I adore aubergines âmelanzaneâ. Quite often I grill them and keep them under olive oil and serve them as a part of antipasto. For some they may be a bit troublesome because they tend to loose undesired water while cooking, frying or baking as a part of another dish. Once you remember to sprinkle aubergine pieces with some salt and leave them to drain for a couple of hours, all your problems should be solved. 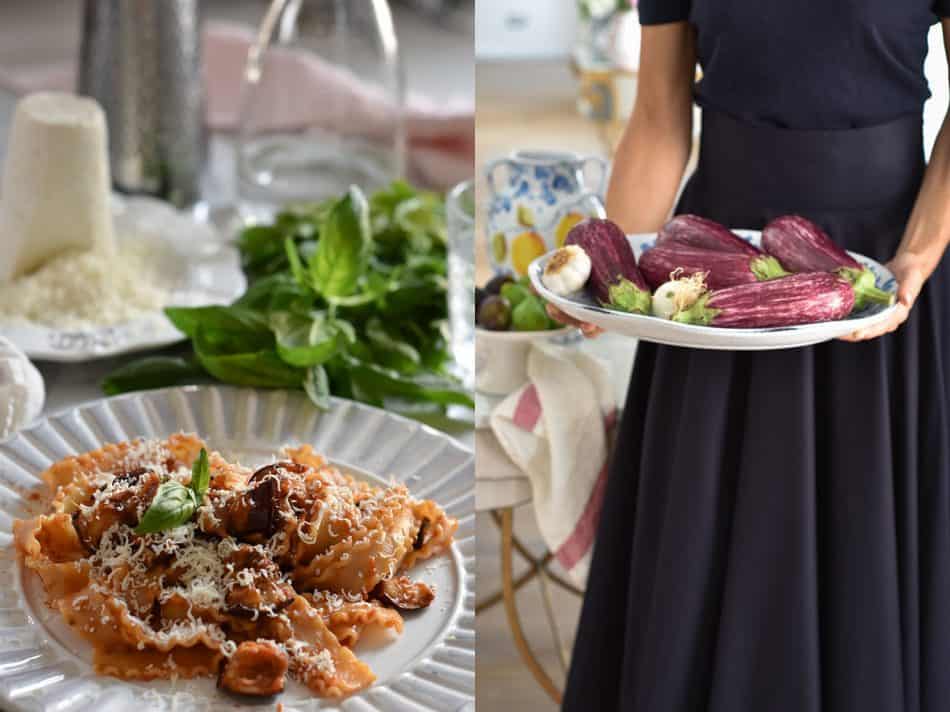 In northern Italy, in the pastry shops you will see very fine fresh fruit tarts. In Sicily, fresh ripe, juicy fruit which is often sold by a fruit vendor on the street in the heat of the summer, is eaten fresh simply as it is. Instead of using it for baking, the abundance of fruit is candied or made into marmalade and conserves, to eat throughout the year.

The most famous of Sicilian desserts and pastries across and beyond Italy are âcassataâ (decorated like a piece of art ricotta cake) and âcannoliâ (pastry tubes filled with fresh ricotta). In the very persistent heat on the island you would use fresh ricotta instead of pure cream and nutty biscuits that are made with oil, pure pork fat âstruttoâ (traditionally used for frying the cannoli tubes) instead of butter.

In pastry shops everything is highly decorated while playing with different colours: green, red, bright yellow and candied citrus peel as well as the icing and chocolate. The atmosphere is dense and thick from the essential oils released by pistachios and almonds.
While the savoury dishes are simple and representative of âla cucina poveraâ (poor manâs food), when it comes to cakes, pastries and desserts the Sicilians show off totally and go wild celebrating the baroque â¦Probably they have the sweetest tooth in the whole of Italy.

This classic combination of dark chocolate and oranges is just exquisite and perfectly matching the Sicilian flavours, especially when I add fresh ricotta to them. It is rich, baroque and absolutely fabulous eaten cold straight from the fridgeâ¦ 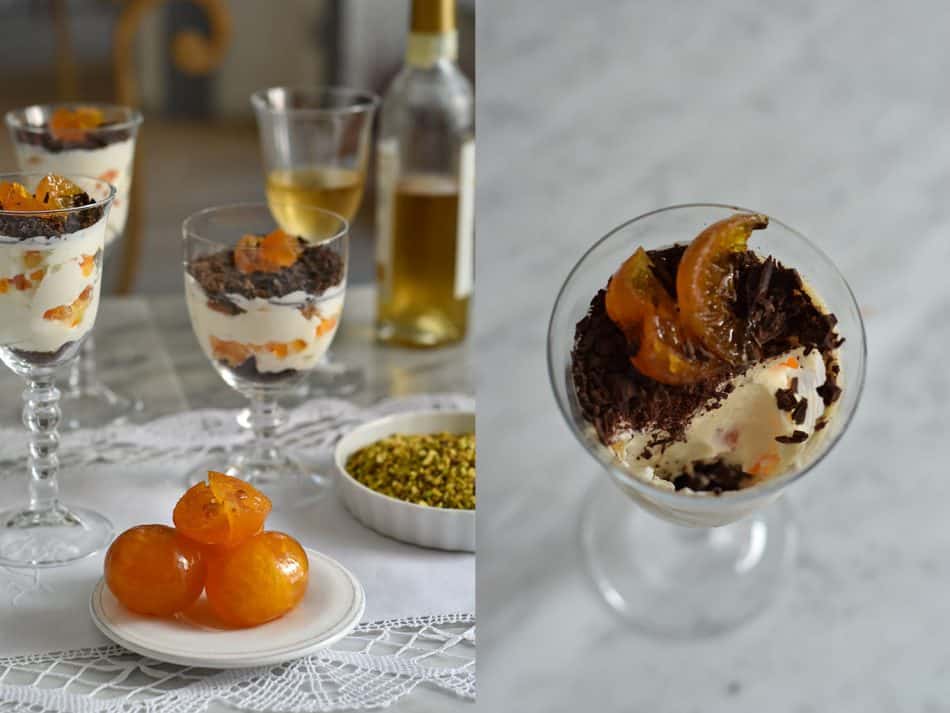 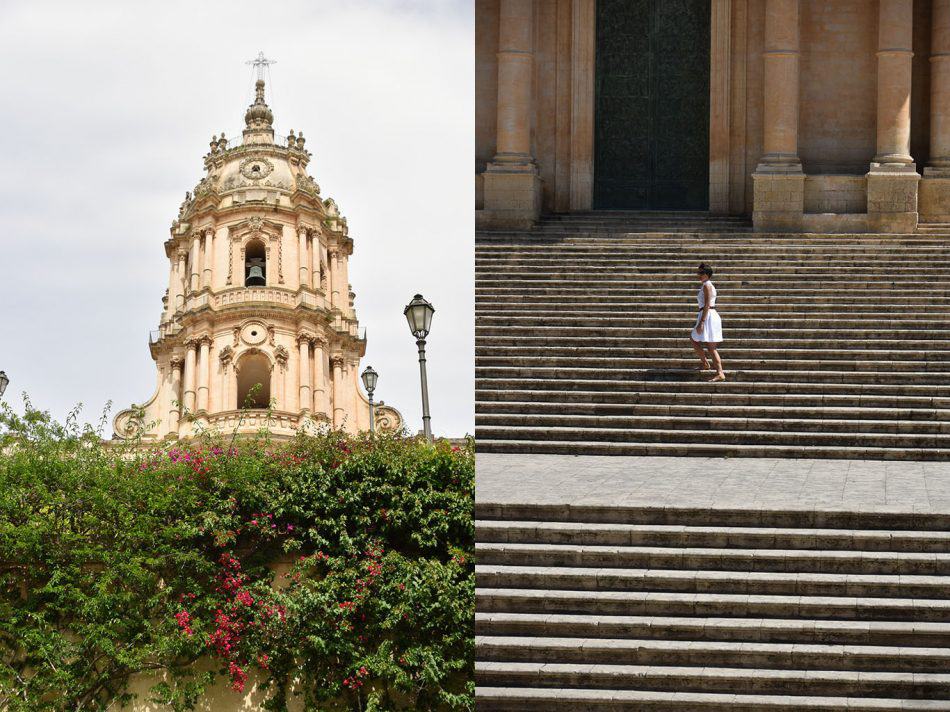