Risotto is a completely Italian affair that cannot be compared to anything else.
There are very few other ways the Italians eat rice other than in risotto. What makes a risotto is the whole process of cooking it with devotion, care and love. I absolutely adore making this dish which I find therapeutic and relaxing.

There has been a lot of misconceptions about cooking a risotto but once you understand a couple of very important steps, every kind of risotto will seam easy. The mystery is perhaps how to achieve the al dente rice (the rice should still have some crunch to it) along with its starchy creaminess at the same time. The grains of a beautiful and creamy risotto should look like pearls and that is why the choice of the rice is very important. My most frequent choice is carnaroli rice with its thin long grains that become almost translucent while holding their shape very well, but most importantly it gives the risotto that sought after creaminess. Apart from carnaroli rice there are also arborio and vialone nano grains . They are perfect for a risotto but those grains have a higher starch content that makes the risotto more dense.
Risotto might have been seen as a warming dish of the northern provinces of Italy (where the rice crops are cultivated) but there is a lot more to it. The finesse and elegance of a simple risotto are the most representative words that I can think of.

Another crucial ingredient for a risotto is the stock that will determine the taste of the dish. I highly encourage you to make your own stock (you can make a couple of batches at once and store them).

It is said that one of the most important stages of making risotto is âmantecaturaâ, which means vigorously beating in the butter and cheese right at the end of cooking and allowing it to rest for a couple of minutes to give the risotto its wonderful creaminess.

Perhaps you may need to make the risotto a few times to get the feel of how the individual stages build the dish and make it come together with the mantecatura towards the very end.
Of course, as always with Italian cooking, the recipes will vary from city to city, village to village, home to home but the steps remain the same.

First you will start with gently frying the onions in butter (sometimes also garlic and other ingredients for example mushrooms or a sausage depending on the risotto you wish to make). Northern Italy is a land rich in dairy produce so of course butter is used.

Next you add the rice to toast it. Every grain should be warmed up and coated by the mixture.
At this point you usually pour in a glass of wine and let it completely evaporate before you start adding the stock (which should be warm when it is time to use).

Stock should be added slowly, even only a ladleful at a time. Once the stock is almost completely absorbed it is time to add more while stirring almost all the time.

If you are making for example a seafood risotto, you will add the seafood at some point of this stage otherwise wait until the rice is ready, which means al dente.

Take the pan from the heat, wait a moment and stir in the cheese and cold cubed butter for the final stage called mantectura.

My first risotto I have ever made (that I was very happy with) was the saffron risotto also known as risotto alla Milanese (a staple dish of Lombardy and Milan in particular). At that time I didn’t live in Italy and was spending most of my time in London. It was in London where my interest in food took another dimension. An Italian friend of mine recommended a book by Giorgio Locatelli, an Italian chef living and running his Michelin starred restaurant in London. That moment was a turning point for me. He has become one my favourite chefs and authors. His honest and humble approach to the restaurant scene of London and of course to the regional food of his native country is so inspiring. I actually have his book next to me while writing this post. I was particularly taken by one of the episodes of his TV series where he was making the risotto alla Milanese (at that time in the premises of Gualtiero Marchesiâs restaurant in Milan, who is considered to be a founder of modern Italian cuisine, unfortunately he passed away almost a yer ago). So this is my small homage to both chefs and the risotto that the DÃ©gustateur and I adore. It is simple, elegant, a pure perfection. This is the essence of Italian cooking.

Very often this irresistible saffron risotto serves as a bed for osso buco (veal shanks braised with vegetables and white wine until they melt in your mouth, a speciality of Lombardy). As much as I enjoy both dishes I choose to make a velvety Italian style potato puree (with grated parmesan and some nutmeg) instead and devour the risotto alla Milanese just on its own. 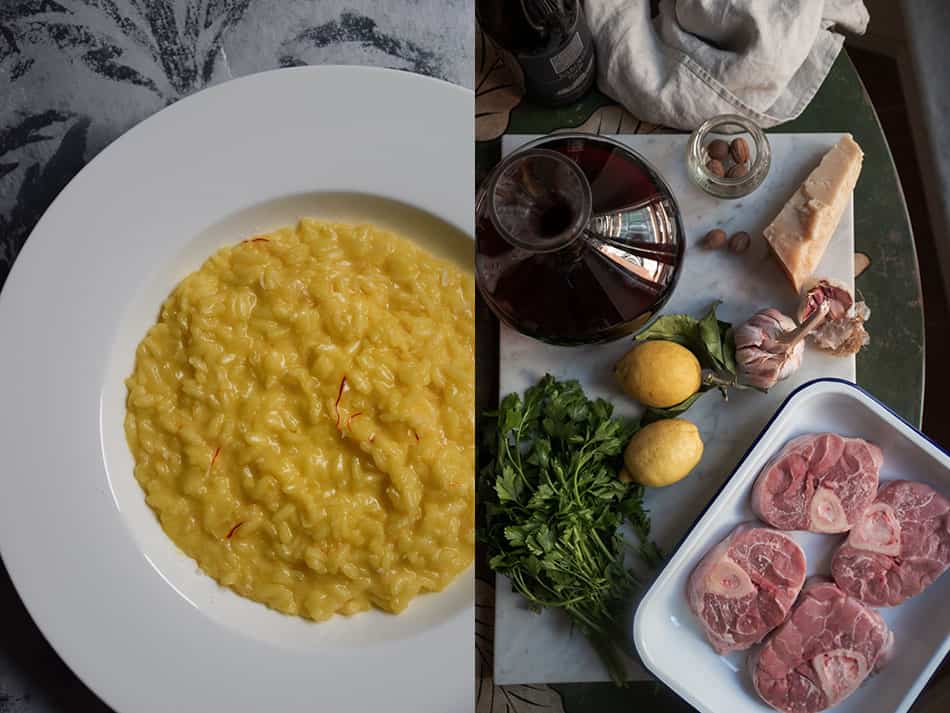 Another risotto of Northern Italy that we particularly like is risotto with Barolo wine and Castelmagno cheese. These are the flavours representative of Piedmont. I started making it once I moved to Italy and I believe it is still fairly unknown beyond Italy, which is a shame. We particularly enjoy the risotto al Barolo during the autumn and winter months with a glass of red wine (from Piedmont of course, most likely Barolo or other Nebbiolo grape wines). Despite the fact that I can buy Castelmagno cheese (dense and crumbly cheese from the province of Cuneo that is milder when young but develops some spice when it ages along with a blue mold) in Rome I tend to bring it back from our frequent trips to Piedmont, which makes it more special to me.

I am more generous with the red wine proportions to the white one when cooking this risotto. I love the depth of colour it gives to the rice and of course the flavour which depends on the wine of your choice and the stock. As my little twist on the classic I sprinkle the risotto (just after stirring in the butter and the cheese towards the end) with toasted and roughly chopped hazelnuts from the Langhe region (Piedmont). Could it be any more Piedmontese than this? 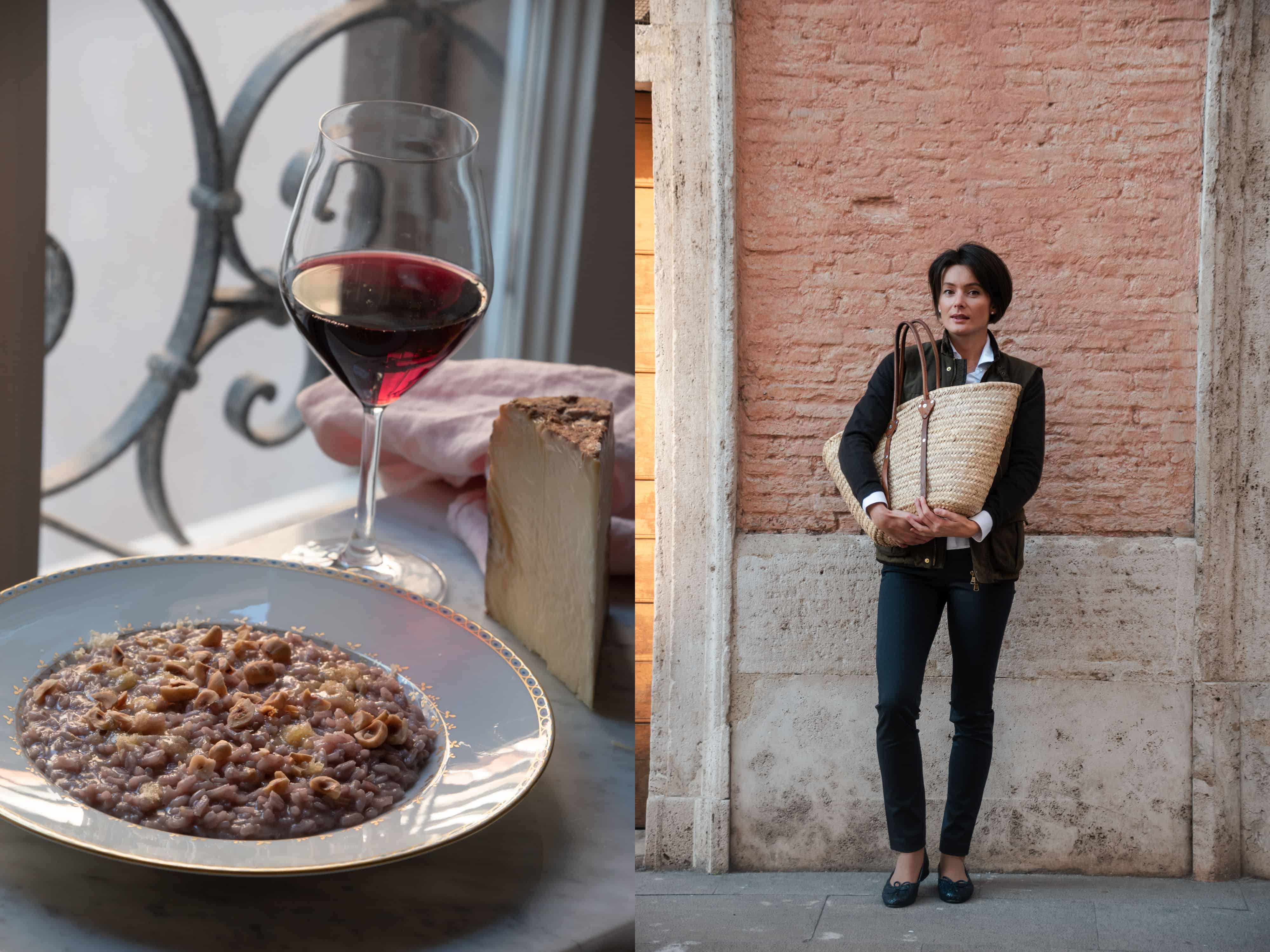 An of course there is the region of Veneto, the land of radicchio, the colourful chicory known for its distinctive, elegant and slightly bitter taste that of course has found its way into risotto.
Radicchio tardivo di Treviso, tall and pointed, is considered the most precious with its elegant shape, deep red colour and a milder flavour. Other varieties of chicory like radicchio di Chioggia (of a round shape and dark red colour) with slightly more bitter notes will be just fine.

The radicchio is added towards the end of cooking risotto so it holds its shape and still has some crunch to it. On most occasions I prepare the risotto with radicchio just with parmesan or Grana Padano cheese and butter to finish it (mantecatura). On one occasion however, while in Venice I had it with an addition of sweet gorgonzola cheese and since then that heavenly creamy and indulgent risotto has made its way into our home. 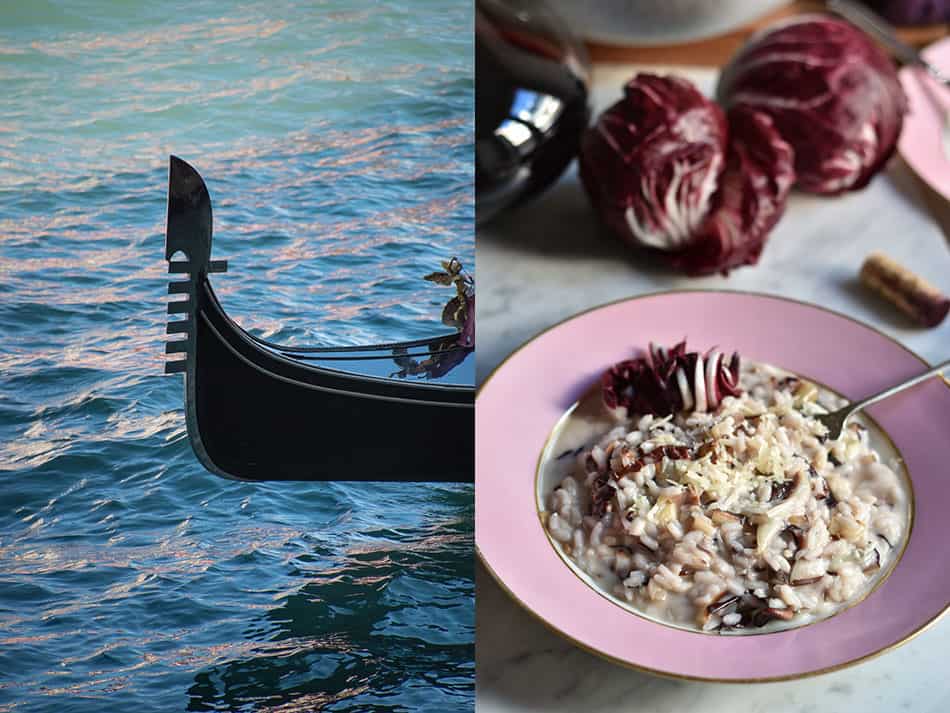