This is a Venetian inspired gnocchi with my own twist.

In an oven preheated to 170 C bake the pumpkin pieces until soft, that shouldnât take more than 30 minutes.

*InÂ  Italy I use pumpkin from Mantova, prised for its delicate flesh. The skin on the other hand is very hard to remove, so you actually bake the whole pumpkin first and peel it once it has cooled down. From a 850 g in weight pumpkin I tend to get around 500g of pure flesh (after peeling) and it takes me about 30-35 minutes to bake it whole in the oven.

Once the pumpkin is baked and has cooled down turn it into puree using a potato ricer. Pass it through twice in order to get a fine puree with no lumps (I use a passaverdure instead).

In a large bowl mix one egg very well with the pumpkin puree. Stir in some salt, sugar and cinnamon. Now while stirring gradually add the semolina until you obtain the texture to form gnocchi (you may not use all the semolina, it all depends on the level of the moisture of the pumpkin and the size of the egg used).

Roll the mixture on a clean surface covered with semolina and form the gnocchi exactly as you roll out and form potato gnocchi.Â

Bring a large pot of salted water to the boil and cook the gnocchi until they come up to the surface.

In the meantime melt the butter in a separate pan, add the sage leaves (you can tear them with your hand, that way they will release more flavour) and walnuts. Cook all together (but don’t fry, otherwise the sage leaves will turn bitter) on a low heat adding some sugar and cinnamon to taste.

Once the gnocchi are cooked, take them out of the water, pour over the sage and walnut sauce and serve immediately. 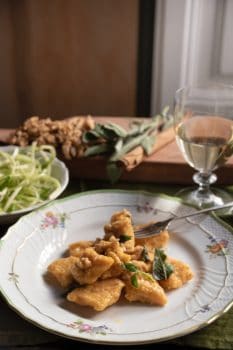