The DÃ¨gustateurâs favourite pasta dish in Rome, and over time it has also become mine.

There are a couple of versions of the original sauce where you can find onion as one of the ingredients. After a while I have found the version (below) is the one we enjoy the most. I hope you like it.

Guanciale* is a cured pork meat carved from the jaw up to the cheek (la guancia). Pancetta is not really an immediate substitute, however you can always use it if guanciale is hard to get.

Heat up a large pan on a medium heat and add the guanciale lardons. Gently fry for a few minutes until the lardons turn golden in colour and some of the guanciale fat has melted.

Pour in the white wine and cook all together until the wine evaporates.

Now add the tomatoes and the deseeded chilli pepper. Carry on cooking (without the lid) on a low heat for about 30 minutes stirring occasionally.

In the meantime bring a large pot of water to the boil (you may not want to salt the water as the pecorino cheese is already fairly salty) add the pasta and cook until al dente (according to the timing given on the packaging). Reserve a cup of the water from cooking the pasta to dilute the sauce if needed.

Once the pasta is al dente, drain it and add it to the pan with the sauce. Toss well and carry on cooking for a minute or so. Add some of the reserved water if you find the sauce too thick. Discard the chilli pepper and stir in the grated pecorino. 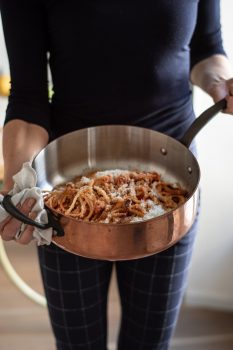