Put the washed potatoes (donât peel them) into a large saucepan and cover with cold water.

Boil on a low to medium heat until soft, check with a small sharp knife if all potatoes are equally cooked.

Drain and leave to cool for a while until you can manage to peel them.

Now press the potatoes through a potato ricer or sieve, orÂ  mash them with a potato masher.Â

In a large bowl mix the egg yolk, mashed potato and flour until well combined. Roll the mixture on a clean surface covered with some flour and form the gnocchi to your preferred size and shape. *In case you donât use all the gnocchi you can freeze or keep them in the fridge for a couple of days.

Bring a large pot of salted water to the boil and cook the gnocchi until they come up to the surface.

Once the gnocchi are cooked, take them out of the water, add to the pan with the amatricianaÂ  sauce and toss all together. Discard the chilli pepper and stir in the grated pecorino.

For the amatriciana sauce:

Guanciale* is a cured pork meat carved from the jaw up to the cheek (la guancia). Pancetta is not really an immediate substitute, however you can always use it if guanciale is hard to get.

Heat up a large pan on a medium heat and add the guanciale lardons. Gently fry for a few minutes until the lardons turn golden in colour and some of the guanciale fat has melted.

Pour in the white wine and cook all together until the wine evaporates.

Now add the tomatoes and the deseeded chilli pepper. Carry on cooking (without the lid) on a low heat for about 30 minutes stirring occasionally. 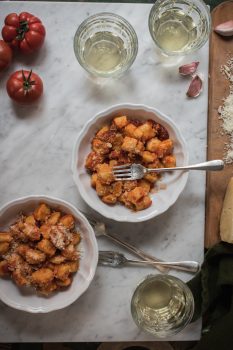