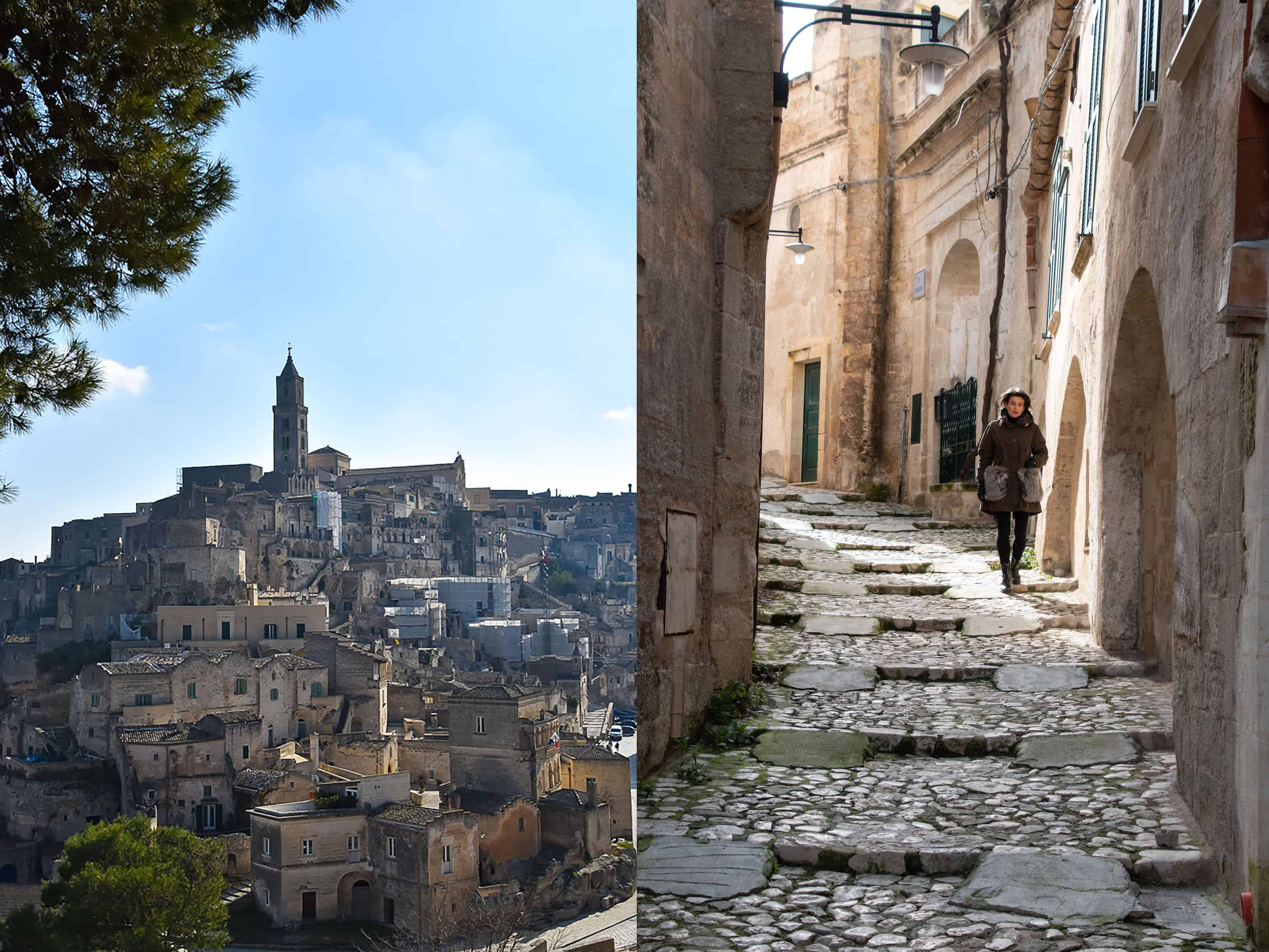 We have just got back from our annual trip to Basilicata. It was our fourth visit to this special place, famous and admired for its cave dwellings, Sassi di Matera. It is quite funny how certain destinations just grab and captivate you completely. Without a great deal of planning ahead you end up coming back to this unique and longed for place year after year. This is exactly what happens to us every time over the winter period. I particularly adore the cold crispy nights and an occasional fog that sets heavily over the stone buildings. Sometimes it so dense that we are happy that we know our way around the Sassi (the stones). The streets are narrow, lit by an accidental lamp and a narrow window light. They are equally spooky and romantic, and the views of the caves are just breath taking. The hotel that we always go back to is a unique project with its main object to provide its guests with as close of an experience of living in a cave as possible. Sure, we are talking about the modern and more comfortable way of living but still respecting and paying a great importance to its heritage. Every single time we really look forward to spending a couple of days in the grotta (cave), we feel cosy and relaxed thanks to the generous amount of candles spreading their light around the whole cave room.

As always on our road trips we brought something to remember Matera by. On this occasion we paid a visit to a very unique (there is a lovely story behind the azienda) and no doubt with a bright future a female wine maker of the Aglianico wine grape. Smaller production and high quality go hand in hand which is something that I truly believe in. We first heard about this particular wine maker over a year ago and are slowly building a small collection at home while eagerly awaiting the release of the latest vintage of which we have already had a preview. 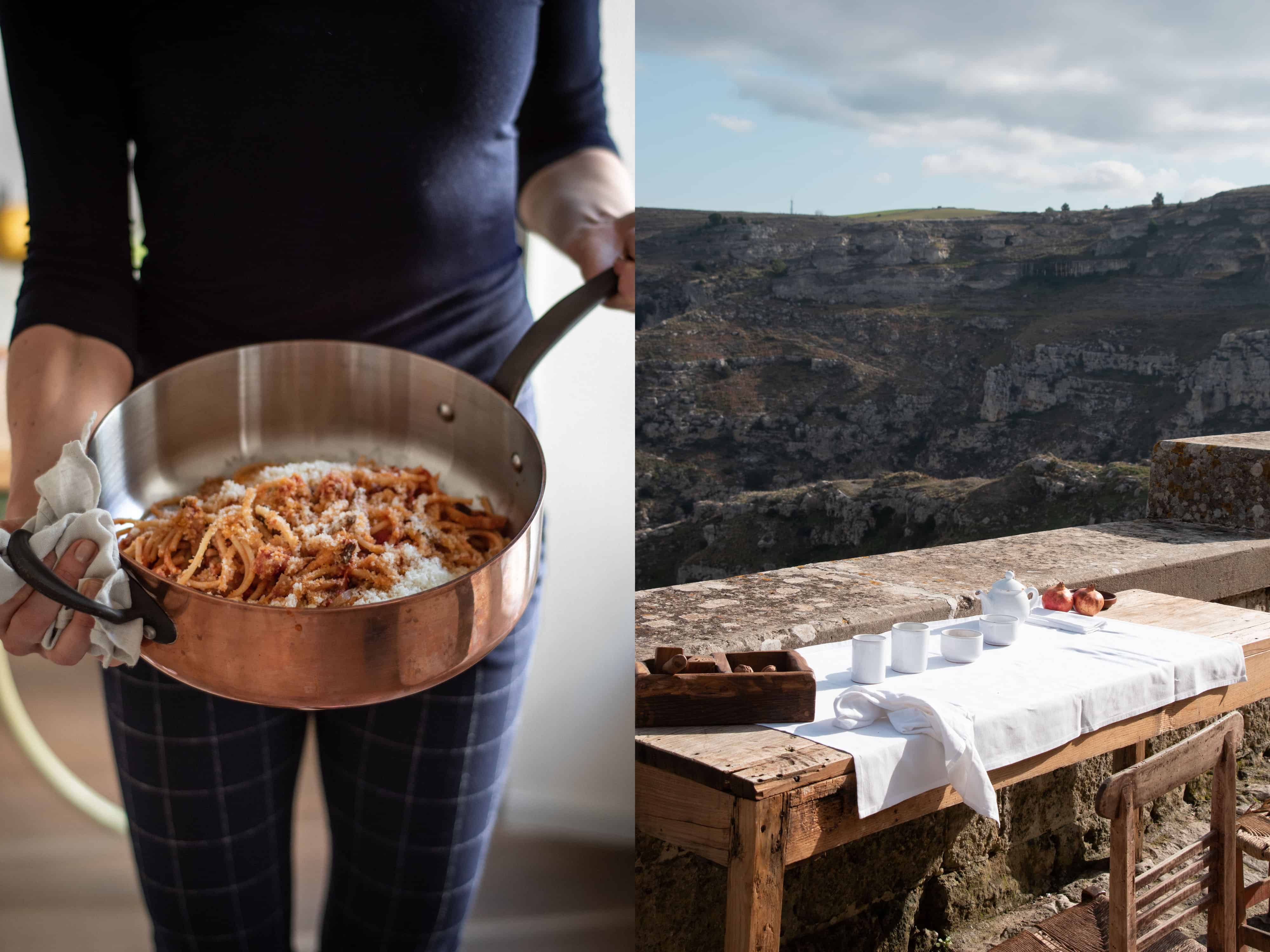 Upon reflection and a closer look at our eating habits, there is a dish that we crave for almost immediately when we return to Rome from any trip. We just unconsciously gravitate to it.
We order it in a restaurant or make it at home without a great deal of planning involved. We could compare it to our fondness for Matera but unlike Matera we can access it more frequently.
Lâ Amatriciana, a pasta dish, common in Rome (originating in Amatrice) and loved by many. First, it stole the DÃ©gustateurâs heart. It took me a bit longer to become infatuated by it, perhaps it was due to the fact that I was not used to or familiar with cooking with guanciale, which is so representative of Roman food and its region. Nowadays when I think of Lazio I immediately have guanciale in my mind.

Of course, you can always play with the original recipe (which in Italy already would have a few variations) and use other ingredients if the ones that the recipe is calling for are hard to find.
The name derives from the word guancia (a cheek) and it is a piece carved out between the pigâs jowl and cheek, and then cured. It is fattier than pancetta but there is no real need to use plenty of it. Its main objective is to enhance the dish with its flavour, but on the other hand, who doesn’t like the crunch of it too?

At the beginning when we moved to Rome, the DÃ©gustateur would order lâ Amatriciana on every possible occasion. I was actually getting slightly annoyed by it as there is so much choice available. But then, you canât take an English man away from anything bacon like. And I must admit, thanks to that I managed to try this dish in so many places and be able to spot subtle differences. The original recipe is strictly followed, however, as always there already exist little variations to it. Some would swear that onion should be on the (fairly short) list of ingredients, others have been strongly criticised for adding it.

So, what makes the lâ Amatriciana so special for us? To start with it is the fact that the DÃ¨gustateur really loves it and I am always happy to make it for him. I am patient with preparing the sauce. You see, a large number of different sauces can be put together during the time allowed for cooking the pasta until al dente. On this occasion however, you start with gently frying guanciale lardons until they become golden and slightly crisp. Next step is to soften its taste with some white wine (sfumare), you just pour in a small glass of it and wait until it evaporates. And then come the tomatoes, rigorously crushed by hand. One small chilli pepper and a generous portion of pecorino cheese stirred in seconds before serving.
Lâ Amatriciana takes roughly 30 minutes to make but it is one of those sauces that can be made in advance and stored in the fridge until needed. 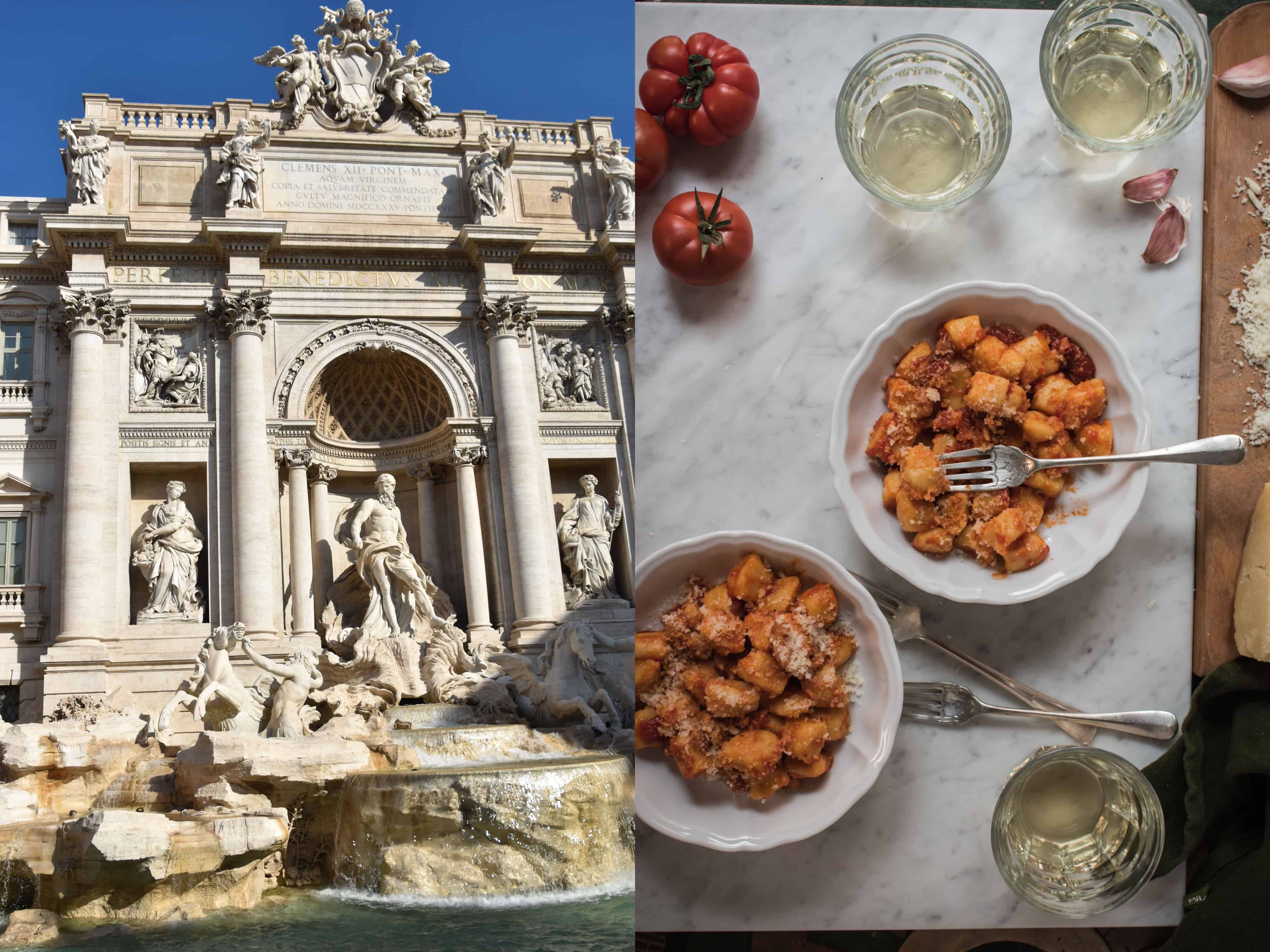 My latest obsession has become gnocchi and the story behind it was to find the right recipe. It may seem trivial, but the devil is in the detail. After having eaten gnocchi in a few restaurants in Rome, light as air by the way, I started to question the recipes I have used used in the past. There was absolutely nothing wrong with them but now the end result seemed too floury to me (but still tender). Gosh, one gets spoiled for food in Italy and all those little things are of crucial importance.

I did a little research and the answer to what what makes the difference is the egg, if used at all. Let me explain, it is better not to use an egg (which can make the gnocchi hard) but add the egg yolk (only) to help bind the ingredients. Well, the only way to find out is to make gnocchi both ways.
Freshly made and cooked gnocchi, tossed with lâ Amatriciana sauce will make a perfect variation from pasta. In fact, gnocchi allâ Amatriciana are very often served in Rome and it is worth trying them.

Slowly we are heading towards Spring, and the brief period of eating raw baby artichokes in a salad with shaved parmesan, agretti that I already had a taste of and the Roman soup la vignarola. Agretti are needle-shaped long green leaves of a very particular and delicate mineral flavour. They are traditionally served with olive oil and lemon juice but they also find their use in a ricotta and guanciale quiche or tart as it is called in Italy.

Having said that, the carnival period and its festivities have not come to an end yet.
Every region in Italy has its own sweet specialities made only during that time of year. In Rome they are frappe, castagnole and bignÃ¨ di San Giuseppe which are my favourites. Anything that comes with the pastry cream is a winner for me. It is nothing else than pastry cream filled small balls of choux pastry which, respecting the tradition, have to be fried and not baked.
And bignÃ¨ di San Giuseppe are exactly what we had to sweeten the end of February. 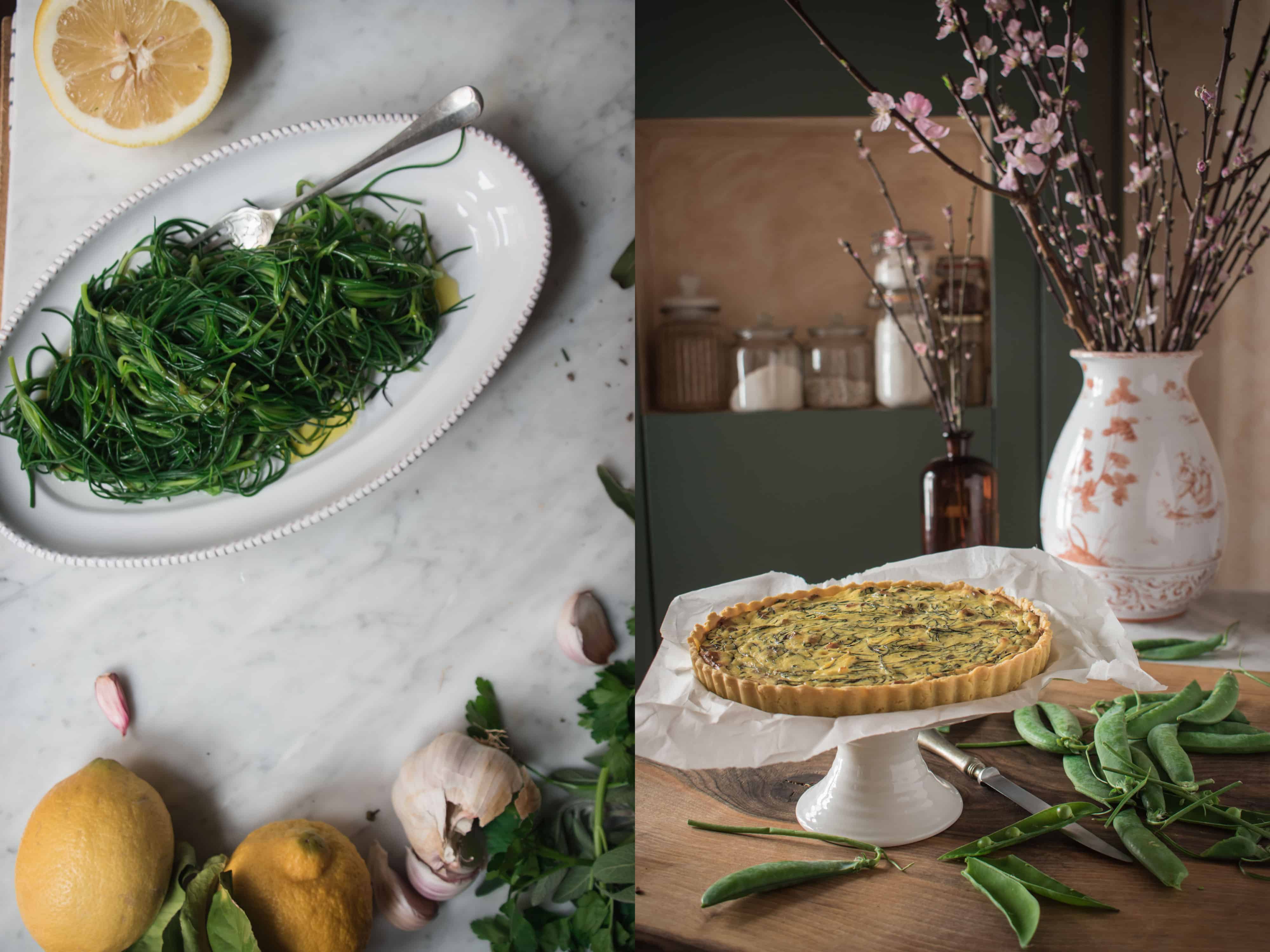