Whisk the egg whites until they start to form soft peaks. Start gradually adding the sugar while whisking all the time.Â

Once the sugar has dissolved and the mixture has turned firm, lay a flat baking tray with baking parchment. With the help of a silicone spatula spoon, form two round meringues of about 20 cm in diameter on the tray. Even out their surface and bake in the preheated oven for about 50-55 minutes.

Once the meringues are baked, don’t take them out from the oven immediately, instead leave the oven door ajar for next 25 minutes and let them cool down.

After 25 minutes you can take out the meringues and let them rest.

First make the almond paste. Preheat the oven to 180 C. Lay the almonds in a single layer on a baking tray and put into the oven for about 8 minutes (as long as they are in a single layer you donât need to turn them). When they are golden take them out and put them into a blender with 30 g of sugar. Whiz until you obtain a paste. Keep to one side.

Next whip the cream until it forms soft peaks (be careful not to whisk it for too long as it might split) and start gradually adding the sugar (50 g) along with the vanilla essence while still whipping.Â

In a separate bowl gently fold about a half of the whipped cream into the pistachio cream. The easiest way is to initially fold just a small part of the cream and then add the rest.Â

Prepare the garnish by placing in a single layer the flaked almonds on a baking tray into the preheated oven to 180 C for about 8 minutes or until they turn golden in colour.Â

To assemble the pavlova:

Choose one meringue as your base. Spread the pistachio and Chantilly cream on top of it. Place the second meringue on the top. Next spread the almond cream on the top and even out its surface.

Scatter the almond flakes on top.Â 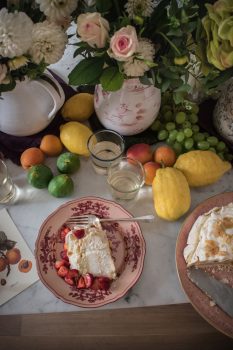