My home is where my kitchen is & seasonal inspiration 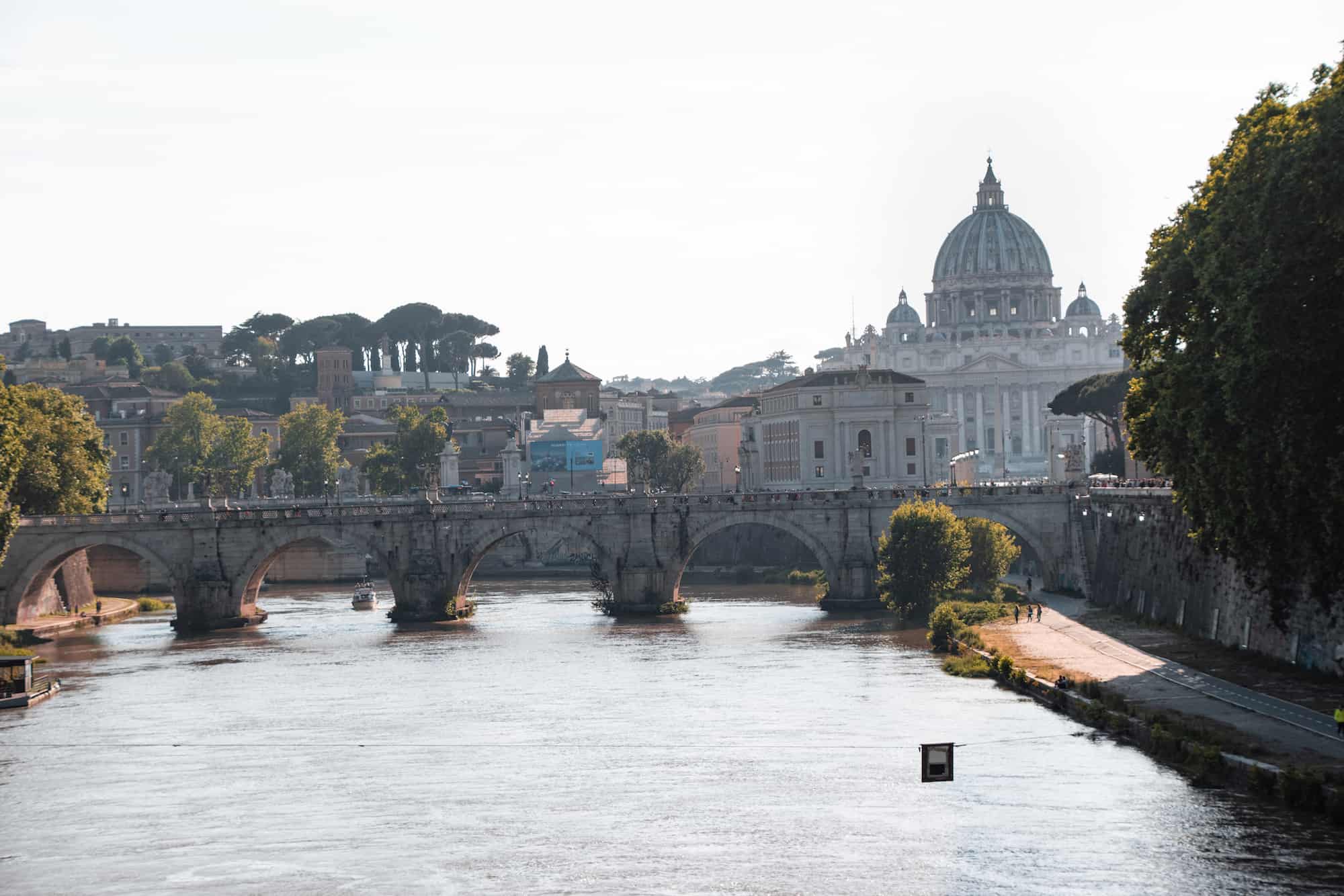 Our kitchen is quite small, at least it seems to be that way when compared to the rest of our apartment. It opens with a sliding door to a long and narrow dining room which we have fairly recently redecorated. Not a huge amount of work involved but it had previously felt like an unfinished room. It is still not fully finished, mainly because I havenât yet found what I may like or what catches my eye. We have wonderful antique shops down the street, but for the time being I prefer just to admire them from a distance. Apart from giving the room some colours I bought a rather large piece of Carrara marble to serve as a table top. It was not an easy job to get this to the apartment, carried up by three men (the lift is too small) up to the third floor. I really donât want to think about moving again right now.

The dining room is the only room painted in a colour other than white (and its shades being a result of different wall finishes across the apartment). We rent at the moment and I happily embraced the newly renovated apartment, a big lateral open bright space, so hard to find in Romeâs Historic Centre. In life you learn to compromise and despite the fact that I am not a great fan of modern interiors, I feel happy in our space. The modern interior comes with an air conditioning unit in the kitchen which I love. Summers in Rome are usually long, hot and humid. Cooking is the last thing you want to do but my little kitchen has become my oasis.
My home is where my kitchen is. You must have heard this phrase so many times in your life already and you may even think of it as a clichÃ¨.

Most of my time evolves around the kitchen. It has always been that way especially when time allows. Over the past few years there have been some changes in our lives, moving to Italy is only one of them. Since then there have been periods where I have had more time to enjoy a lazy potter in the kitchen and dedicate more time to experimenting, recreating the dishes that I have tried eating out or catching up with my cook book collection. This time wasnât always available in the past. I donât take it for granted and I hope it will remain that way. A perfect balance that all of a sudden can be spoiled or disrupted, sometimes when least expected. Unfortunately a couple of recent weeks were quite stressful and rather unpleasant for both of us. As for every couple the following is true: we are on this boat together. But problems are to be confronted, dealt with and resolved, preferably sooner rather than later. It is exactly during these difficult moments when you realise what matters the most. What is important for us and where that is. 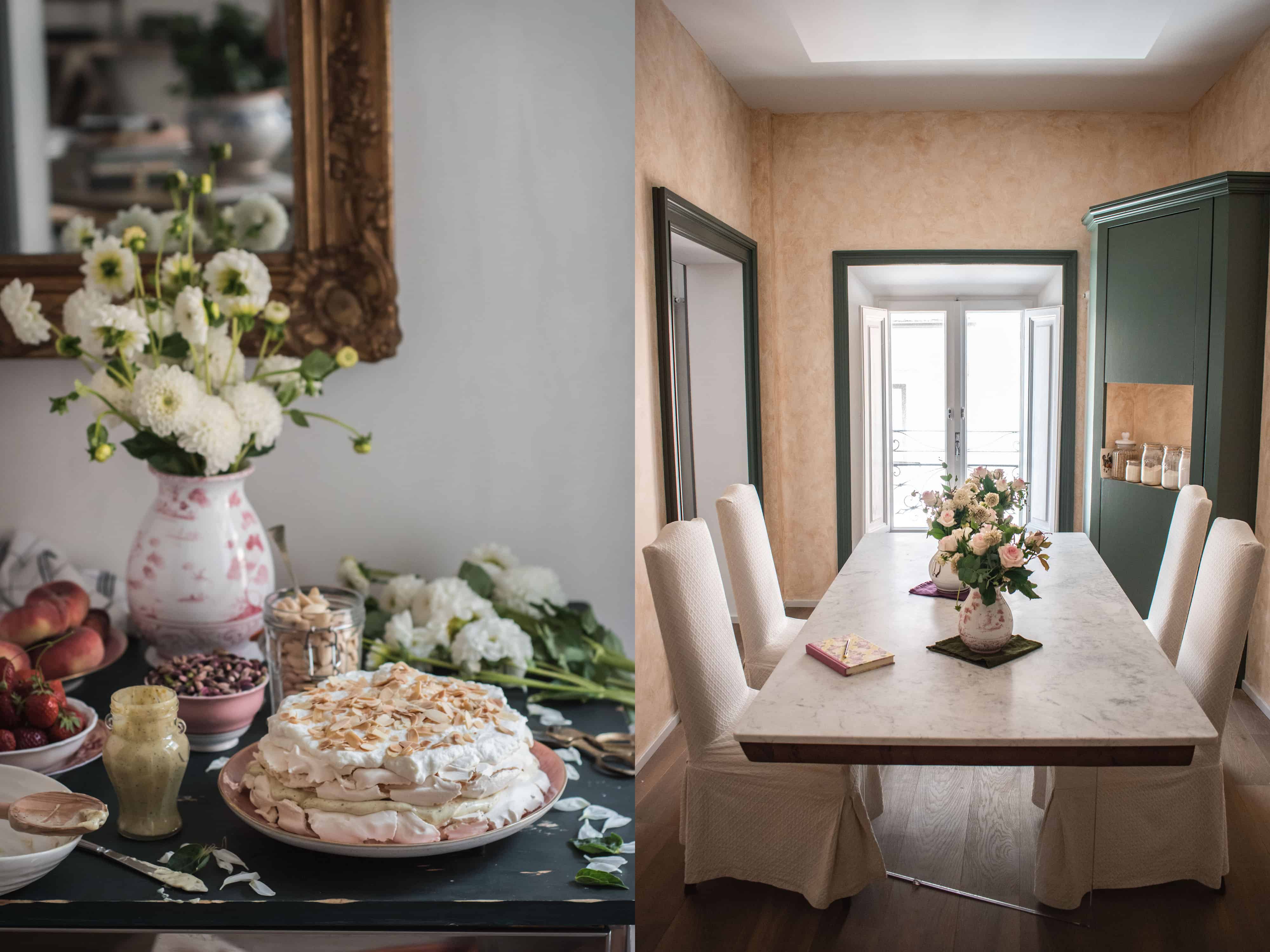 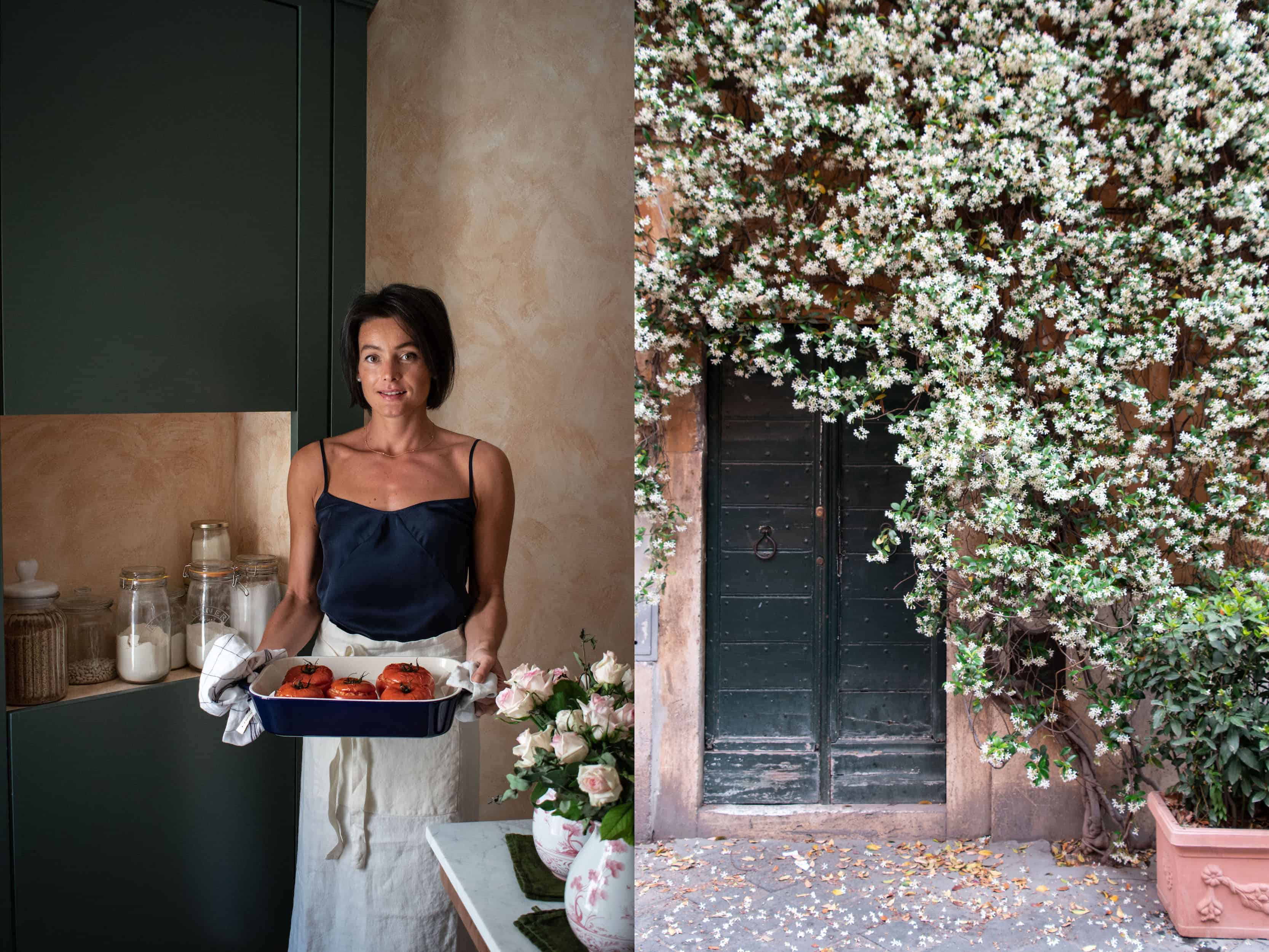 No sooner had I returned to Rome from a routine London trip (a few days earlier than the DÃ¨gustateur who had to stay longer) and was happily back in my “small and modern” kitchen than I realised this is where my heart is at home. Despite arriving late in the evening I took a slow stroll to the grocery store (open till very late in the Historic Centre) enjoying the widely spread perfume of jasmine. I was alive, happy and smiling. I made sure I bought enough eggs and sugar. My plan was to start already on one meringue layer of the pistachio and almond pavlova that I had created in my head whilst still on holiday in Sicily. I just couldn’t wait. The pavlova that I usually make consists of two meringue rings. My oven unfortunately is too small to fit both in at a time, so the second one was made the following day after my morning run (in the nearby Villa Borghese park). The high temperatures and humidity are here. I try to combat them by going to the park even earlier in the morning than I usually do but at the same time it is so lovely to feel that warmth of the sun on your shoulders, the sign of the much delayed summer. 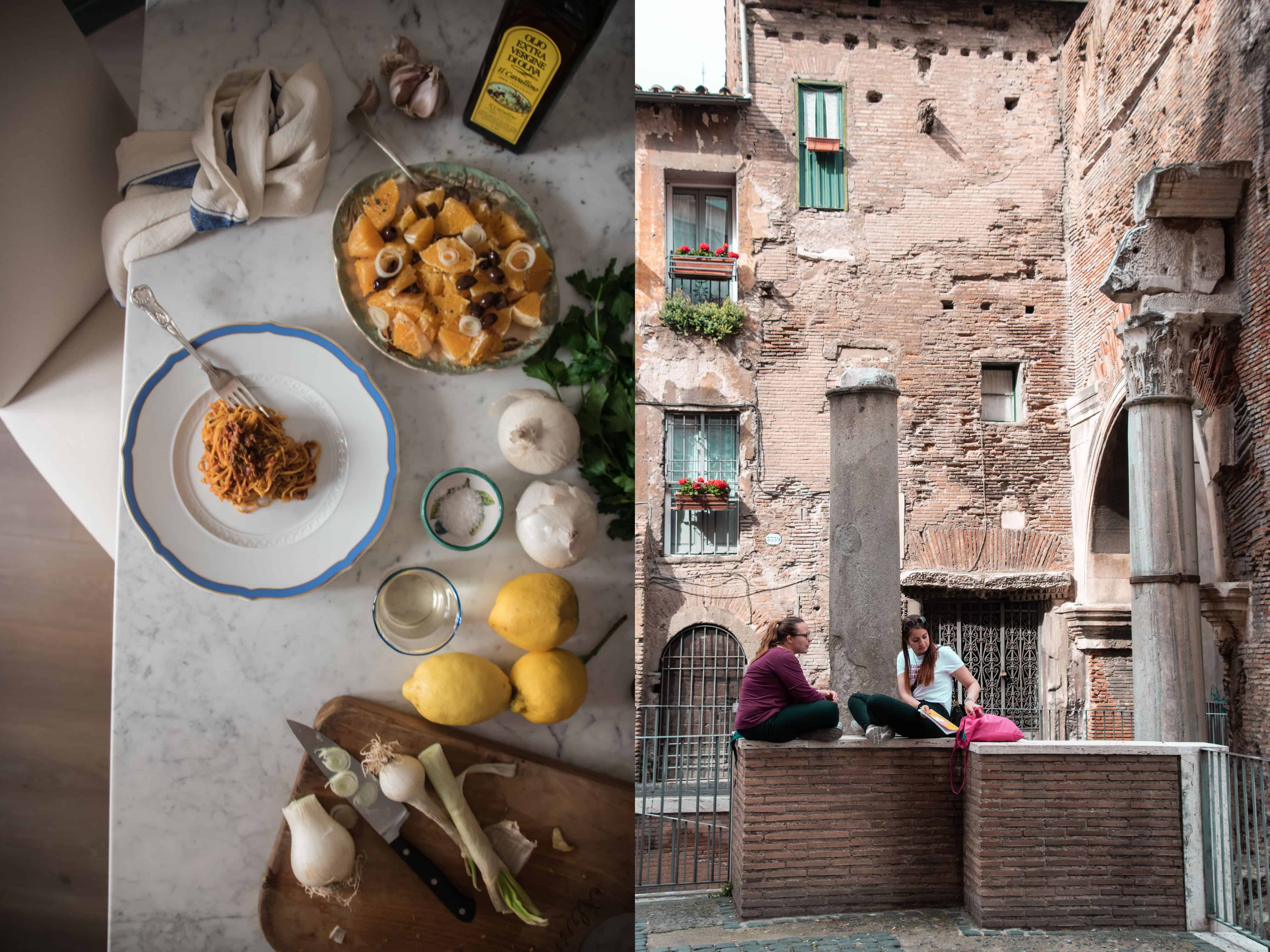 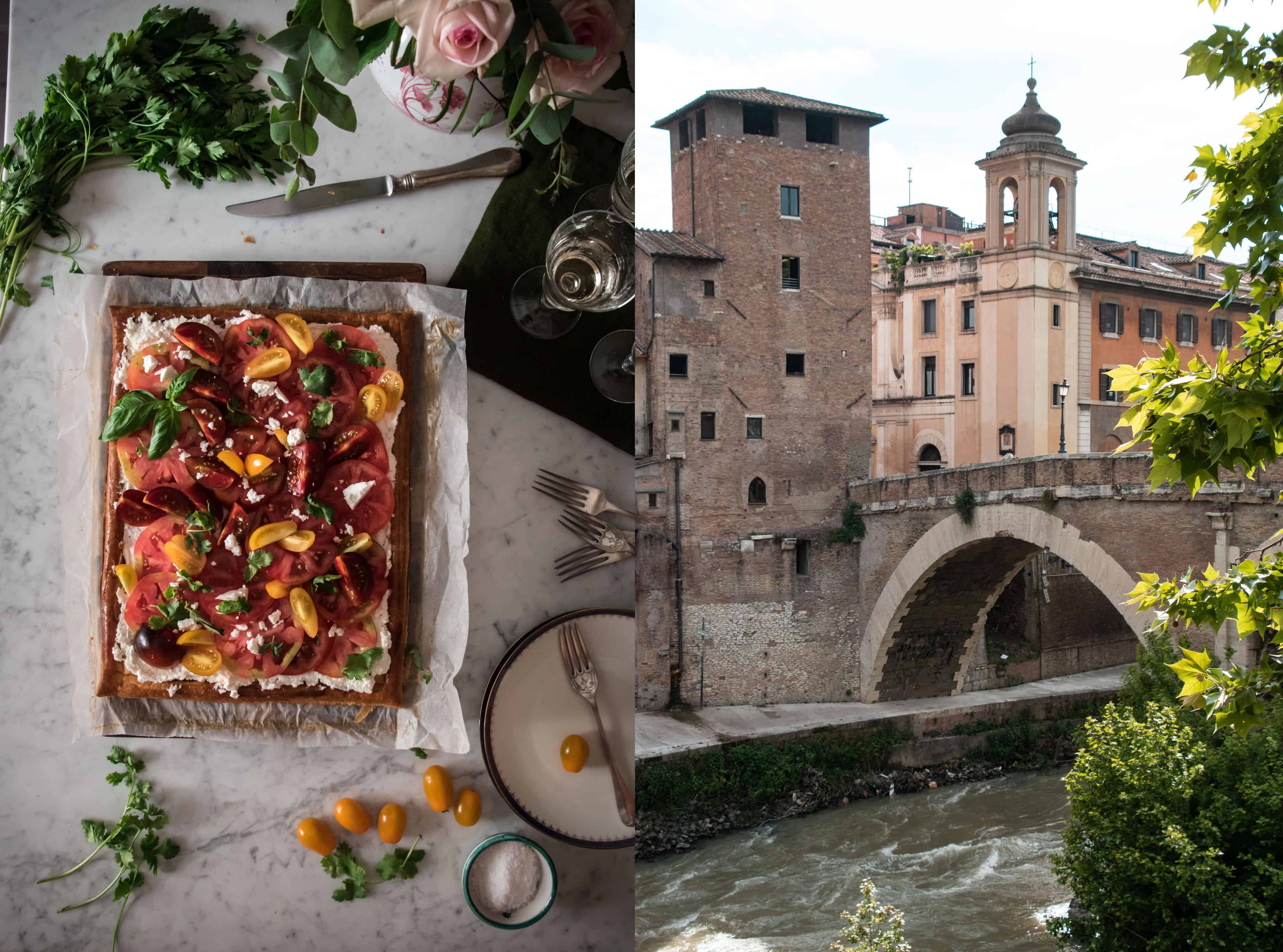 My dear friend Francesca came for a dinner the next day. I was still on my own in Rome and we had a lovely catch up between us girls.

I am a red wine lover but on a hot day bollicine (very chilled as per my personal liking) is just perfect. During summer months I tend to keep a bottle (or two) of Prosecco or another sparkling wine in the fridge. You never know when you might need it.

I suggested we ate in the dining room but Francesca preferred to stay in the kitchen and eat at the island, my work space, laden with plenty and various ingredients. She liked the small chaos in the kitchen that I had created. For her it shows that the kitchen is lived in, perhaps the most in our home.

A bean, tuna and red onion salad is a fantastic starter and takes no time to make. A piece of good white bread to soak up the juices is a must.

After the, mainly gastronomic, recent trip to Sicily I came back inspired. I think it was our best time on the island so far. Wild fennel is ever present in Sicilian cooking and you can be very creative with it. As a result I served us tagliolini with a wild fennel and sausage ragÃ¹.
I must have already mentioned that I tend to choose something very easy to make when having guests. That way I can focus on the conversation with a little input in the kitchen.
The ragÃ¹ just needs to be heated up and tossed with freshly boiled pasta. So simple and so delicious.

The light as air pistachio and almond pavlova was already in the fridge and waiting patiently. I was contemplating the idea of combining the almond and pistachio flavours with pavlova while still in Sicily.

I adore pistachio cream made of pistachio from Bronte, the region of Sicily considered to be producing the best pistachios in Italy. The almonds from Val di Noto are also something to die for.

I folded the pistachio cream into freshly made Chantilly cream, giving it a lighter texture, a light green hue and a more delicate taste. A similar thing with almonds. I chose to toast them first, that way they release their essential oils, then blend them with a small amount of sugar until obtaining almost the consistency of a paste. I generously decorated our dessert with fresh strawberries and we devoured it without saying a word. 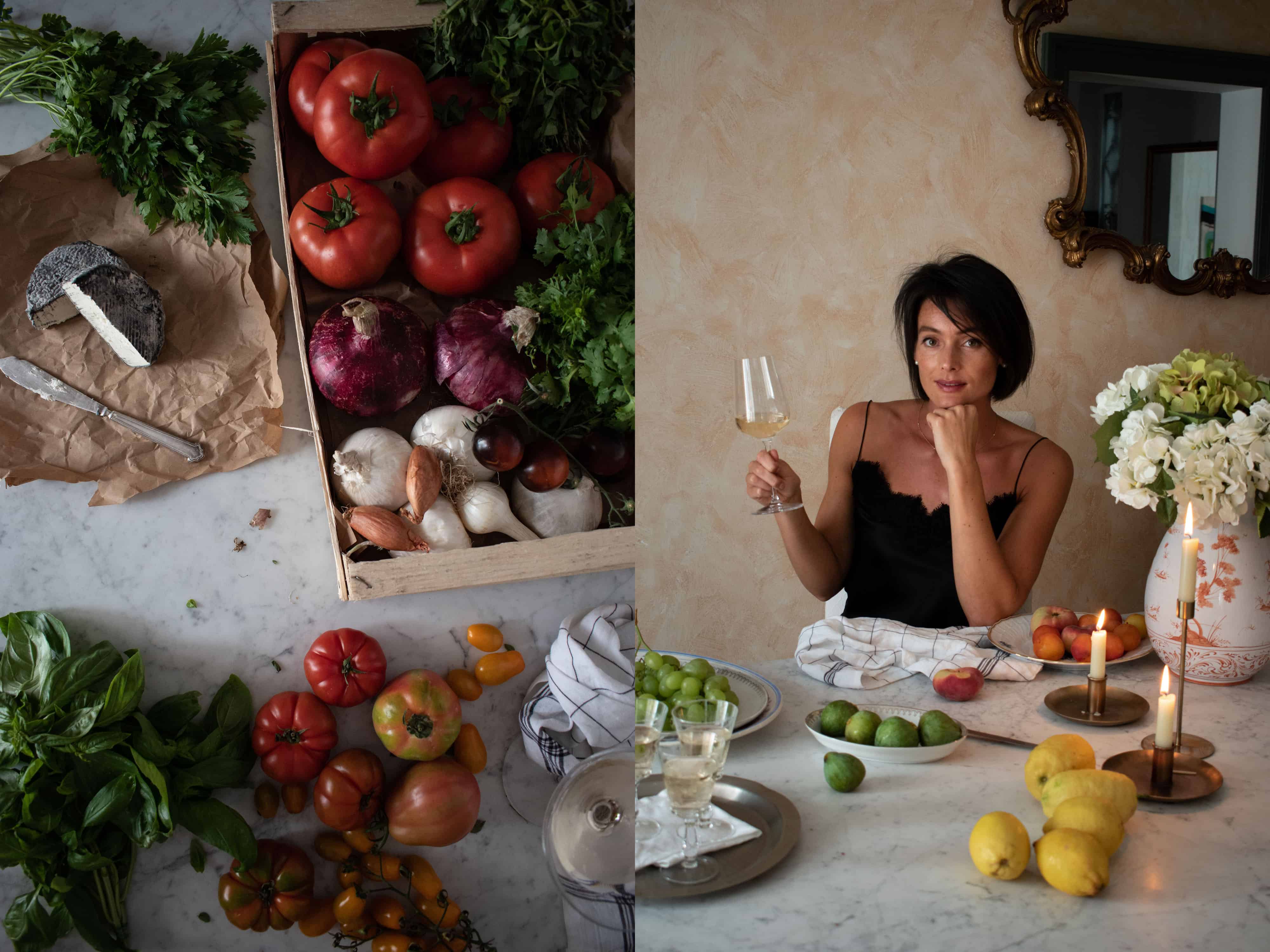 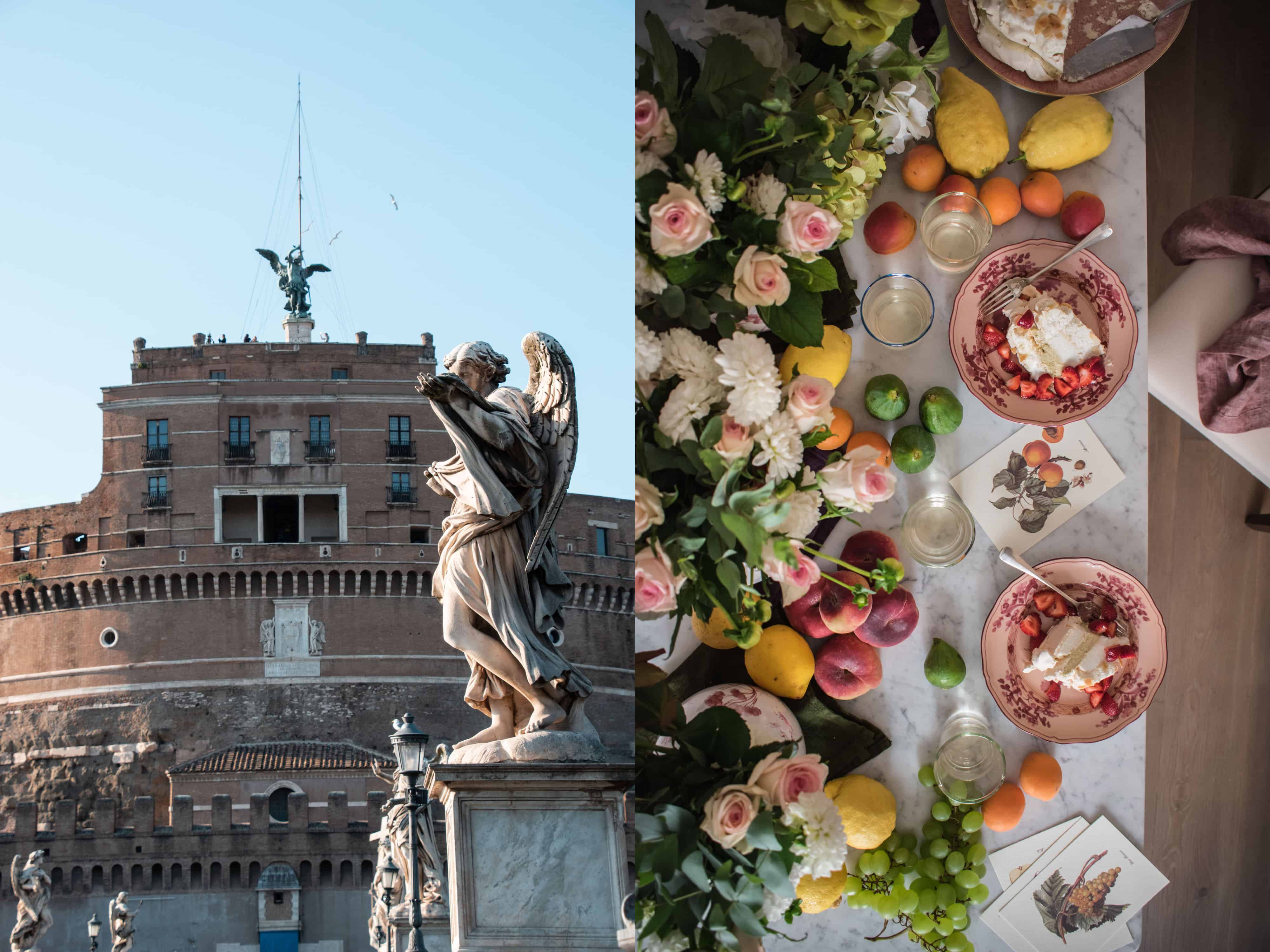 I had prepared enough of the ragÃ¹ so that the DÃ¨gustateur could try it upon his return. He loves the Italian sausages. They consist of a 100% meat and they differ in taste depending on the butcher you buy them from. Every sausage maker will have his lovely way of adding some fresh garlic (but not too much) or spices like pepper, coriander, chilli or fennel.

Very often our lunch is a kind of âsnacky” lunch where I buy sliced cured ham, some cheese, seasonal vegetables and some bread for the salad juices which we almost always have. You could pack it all up and have a dreamy picnic outdoors, perhaps under one of the trees to escape the strong sun in Villa Borghese. We live next to it hence it seems to be an obvious choice apart from the fact that we really love this park. I in particular make a use of it a lot. An early morning jog every now and then is so peaceful, the tourists normally havenât reached this destination yet. I tend to stop and admire (frequently on my own) the view over Piazza del Popolo and the St. Peterâs Basilica in the background.

A few days ago I saw large, plump and meaty tomatoes being sold in the fruit and vegetable market. I knew immediately what I would be making for lunch. But plenty of other tomatoes of different shape, size, colour and flavour gave me a new idea. There are days when I ask myself in the morning: what shall I make today? The ideas donât always come immediately but then I rely on the market and what is in season for the inspiration. It never fails.

I picked up a sheet of puff pastry from a local supermarket on my way home. On the same day I improvised and made a fresh tomato tart on a bed of Feta cheese and crunchy baked french pastry generously decorated with fresh herbs: basil, coriander and oregano. Use the herbs that are available (always fresh) and that take your fancy. I love to mix coriander and mint but somehow on that particular day mint was hard to get. 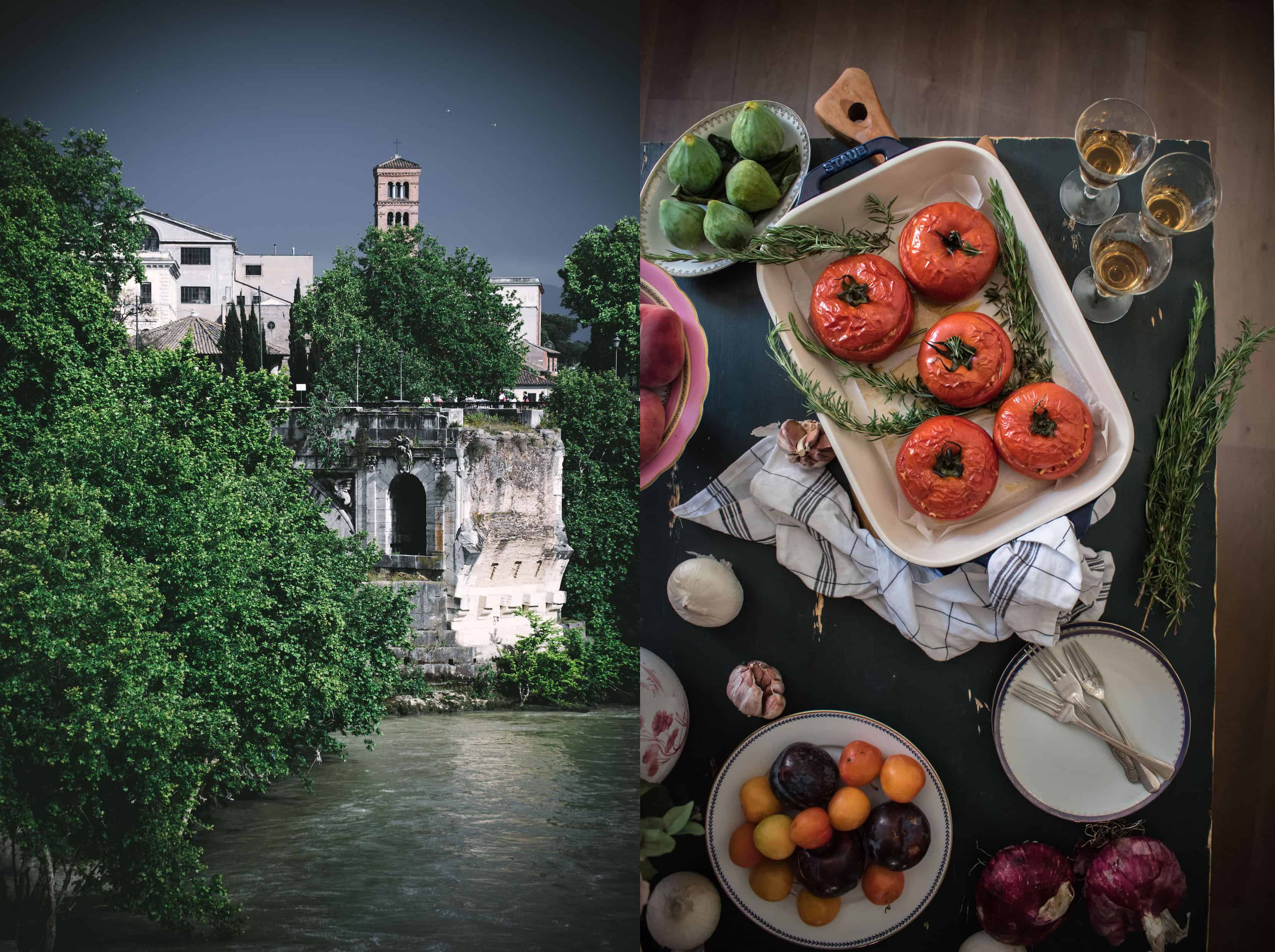