Serves 4-6 as a starterÂ

Start with the artichokes.

Fill a large bowl with cold water. Squeeze the juice of one lemon and add it to the water.

Cut the second lemon in half and pass every piece of cleaned artichoke quarter with it and put it immediately into the water with the lemon juice.

Heat a couple of tablespoons of olive oil in a pan large enough to accommodate all the artichokes, preferably in a single layer.Â

Place the artichokes in the the pan and fry for about 5 minutes. Add the white wine and wait until it evaporates. Pour over enough water to cover and add a few pinches of salt and pepper and two thick slices of lemon. Bring the water to the simmer, then cover the pan with a lid and cook gently until the artichokes turn tender (check with a small sharp knife). This can take 15-20 minutesÂ

Once the artichokes are ready strain them and allow to cool down a bit.

Make the artichoke and ham rolls by holding two artichoke quarters (artichoke hearts at opposite ends) and rolling one ham slice around them. Don’t worry if the ham doesn’t fully cover the artichokes.

You should have 12 rolls in total.

Melt the butter in a pan, stir in the flour and cook over a medium heat for a couple of minutes. Gradually (very important, otherwise you risk having lumps) whisk in the milk until it is incorporatedÂ  and keep stirring while you bring the sauce to the boil. Continue stirring for a couple of minutes until thickened. Next stir in the mustard, season with some salt, pepper and nutmeg. Ladle two table spoons of the sauce and spread it onto the bottom of a baking dish (for the artichoke rolls, make sure it is big enough to accommodate them in a single layer ). Now add to the pan with the sauce about 70-80 g of cheese and stir until melted. Taste and season the sauce to your liking.

Arrange the artichoke and ham rolls neatly next to each other and evenly pour over the bÃ©chamel.

Mix the remaining cheese with the bread crumbs and sprinkle over the top.

Bake in a preheated oven to 180 C for 20-25 minutes until golden brown and bubbling.

Serve with a green salad and some crusty bread. 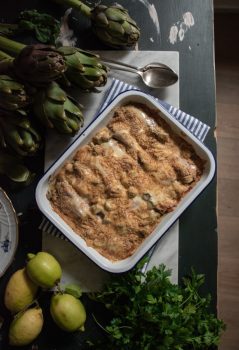