A culinary trip to Tuscany 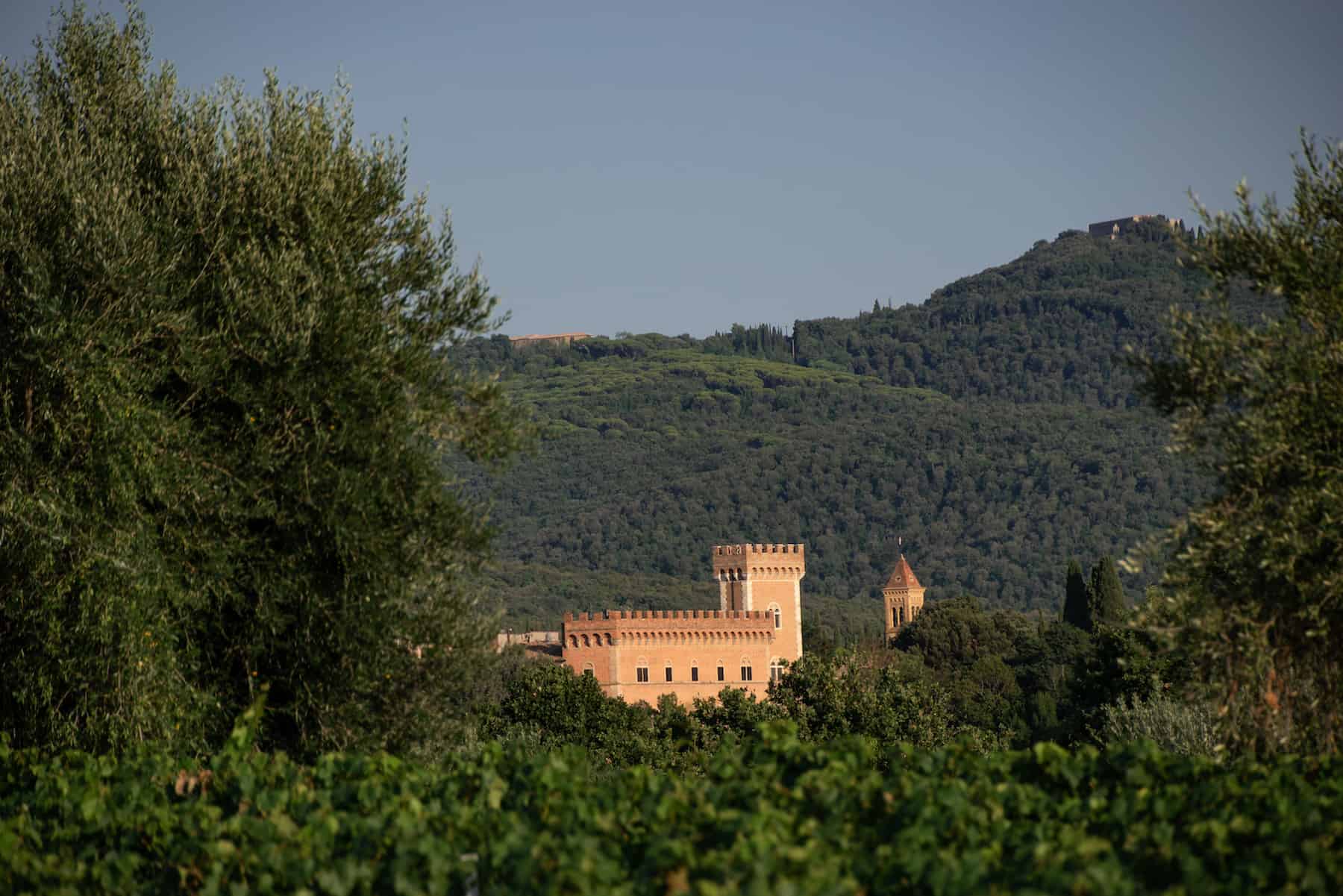 Itâs been a while since I wanted to write this post. I feel that itâs incomplete but I decided to post it regardless. I shall look forward to completing it in the future. Initially I lingered over a bit with putting a few words together because we were planning to visit Florence and probably Montepulciano in late February. Perhaps what I was searching for was an inspiration and trying out new dishes. We have been visiting Tuscany fairly regularly on many different occasions. Iâam particularly fond of it in Autumn and early Spring, when the hills are shrouded with an early morning or afternoon mist, when I can enjoy surrounding earthy smells and when grilled meat on an open fire with some fresh rosemary accompanied by a glass of an elegant red wine has never tasted better. Having just said that I can feel the breeze on my skin and travel in time to our summer meals: pasta with clams, prawns and langoustines (the best one perhaps that weâve ever had), red prawn tartar decorated with burrata, baked whole fish either in a salt crust or in a white wine and tomato sauce served with raw fennel pieces and eaten at one of the best and quiet settings looking out at the sea, admiring the sunset and enjoying a glass of chilled sparkling wine. 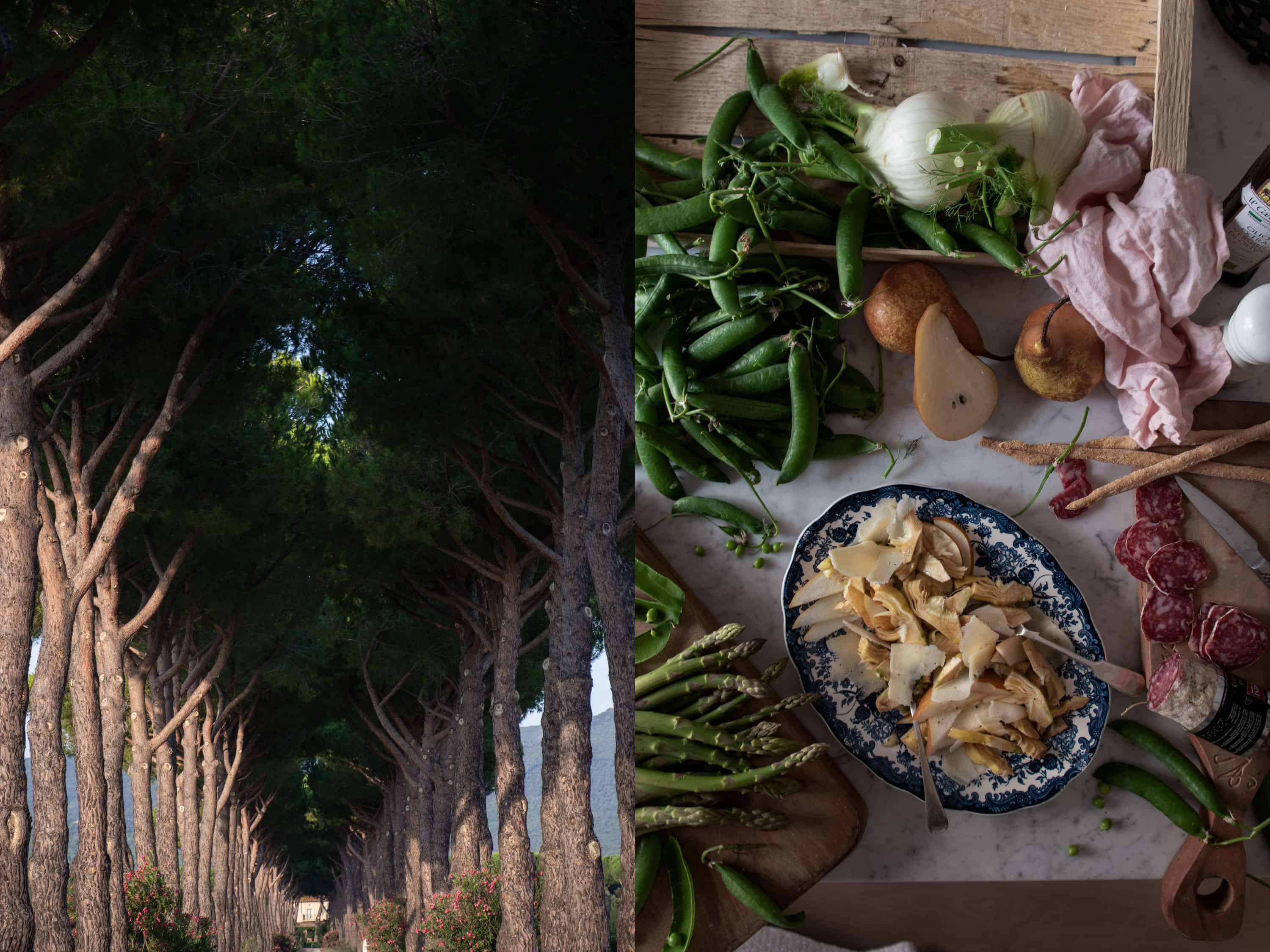 Sadly in the current situation with the corona virus spreading fast, our plans have had to be postponed, most likely cancelled. But whilst we are at home I like to bring certain flavours back onto our dining table.

Tuscan food with its great culinary tradition and a deep-rooted local spirit is represented by cooking what is available and it is done properly. It is a cuisine of itâs land and bread favouring a long cooking process. It is synonymous with those meat dishes for which the Tuscans have a genuine affection: chicken giblets, lampredotto or tripe, Chianina beef, Cinta Senese pork and of course game. The Tuscans are also called mangiafagioli, the bean eaters, as pulses like lentils, chickpeas and fava beans grace dining tables extremely often. Bread is almost sacred in this region of Italy and used in an infinite variety of ways, proudly without salt. Dishes like panzanella, papa di pomodoro or carabaccia (tomato and onion soup respectively) and ribollita are all based on bread. Ribollita, by the way, on the day it is prepared is only a bread soup. That re-cooking, ri-bollire (the day after the soup was made) is that extra ingredient, without which we would not be talking about this soup at all.

La Toscana, once the centre of The Renaissance, today a region with one of the greatest concentration of art works spread over a vast and diversified territory. The geographical layout has undoubtedly contributed to the variety of the produce and subsequently the dishes and to the differentiation between meat and fish. The produce and flavours of the land are well respected without loosing personality. One can see the whole of Tuscany as a mosaic of local traditions, often interwoven with influences and exchanges with neighbouring regions. It is a cuisine based on just a few fundamental ingredients like the rustic Tuscan bread for example, today known across the whole of Italy. Itâs greatest particularity is the absence of salt which allows it to marry extremely well with more flavoursome ingredients and of course salty cured hams or salumi. Grilled slices of casareccio bread, brushed with garlic and drizzled with local olive oil is the essence of the Tuscan cuisine in its most simple form.

Tuscan cuisine can be both simple and refined, rustic and aristocratic and that also applies to sweets especially when Vin Santo is taken into the equation or chestnut flour.
These few words which youâve just read are filled with nostalgia that I have for this large and diverse region still yet to be discovered, studied and learnt. I am longing for its earthy flavours, porcini mushrooms, wild boar stew, meat ragÃ¹ with home made pappardelle pasta, caciucco (a fish stew) and many other dishes still to be tried and tested. 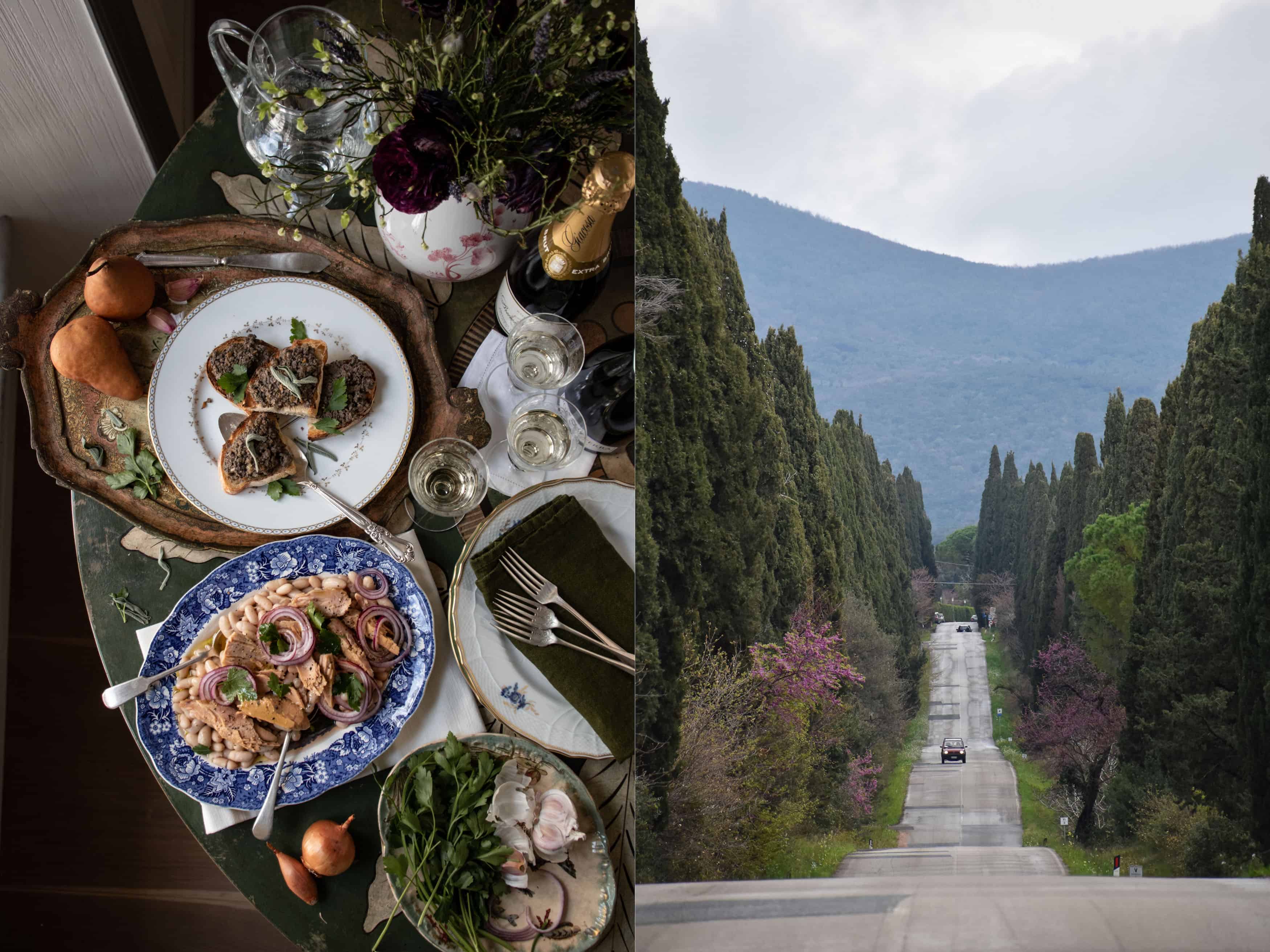 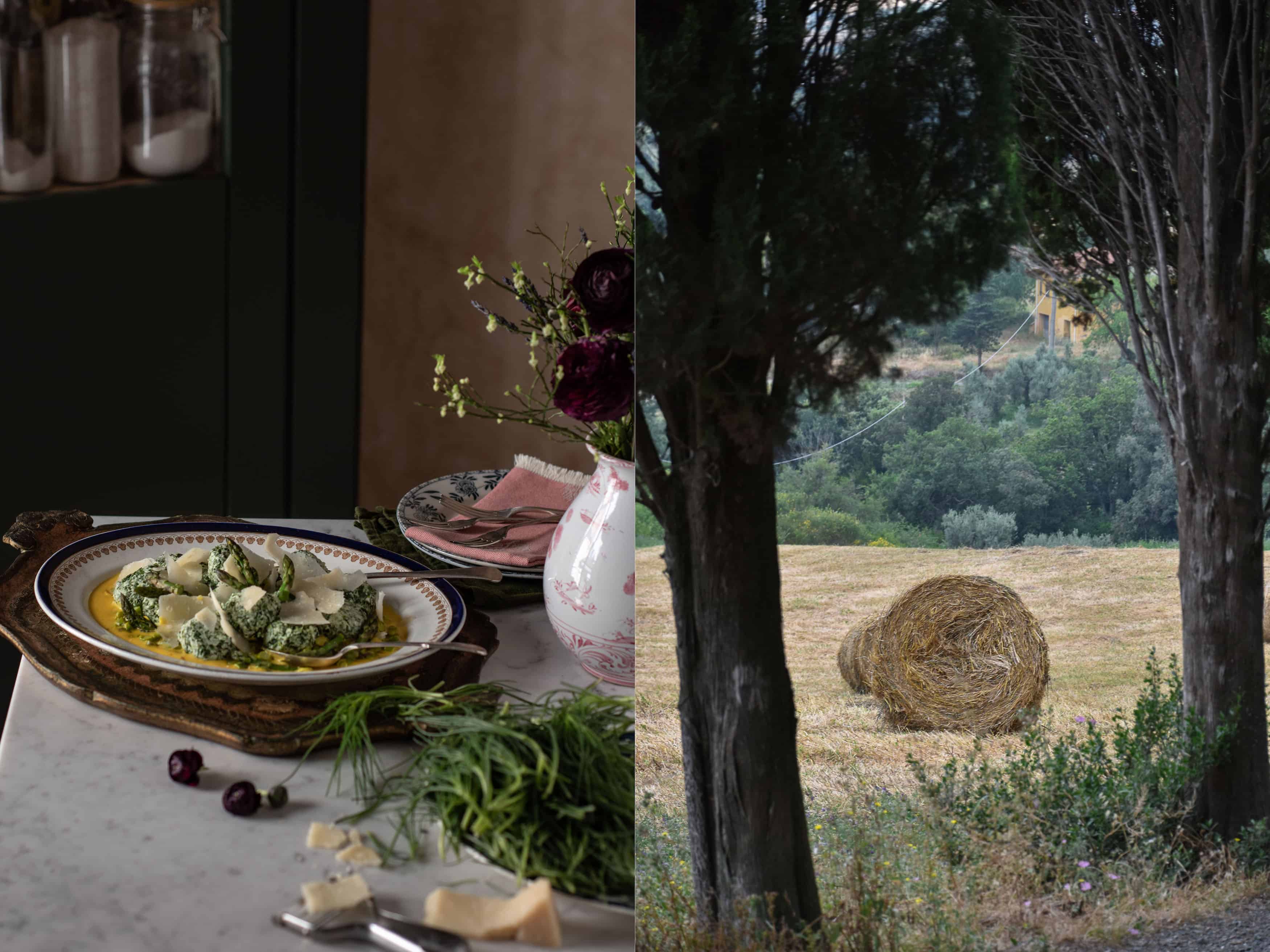 Currently, during the peak of the corona virus and the home lockdown I wish that the moment for all of us of being healthy and able to move freely will come soon.

We live in the Historic Centre of Rome and I can only share my experience from this part of town. We have a few very small supermarkets that are doing their best to comply with the latest and fast changing regulations. All products are available (apart from fresh yeast which was almost a miracle to find anyway), nobody is panicking and hoarding food, apart from one or two cases of foreigners, who canât be blamed especially if not speaking the language. We all queue outside maintaining a reasonable distance apart from each other. Some fruit and vegetable vendors have closed down their stalls, unfortunately Campo deâ Fiori is empty but there are other well prepared and well stocked vendors that I am full admiration for. Also butchers, fish mongers and independent grocery stores keep on overwhelming us with their dedication and hard work during these difficult and uncertain times. Gradually the streets have turned rather empty and most of the locals stay at home as asked, the one meter distance rule is obeyed in stores and the police presence is somehow less prominent or at least less visible to me, which is only good news (I see it as the sign that finally most of us leave our homes only when really neccessary). At least in my neighbourhood.

Once this is all over I will open a bottle of the finest Supertoscan or Vino Nobile di Montepulciano that I have at home ( weâve built up a small cellar over the years), make my own pappardelle, serve it with the pulled beef that I have left after cooking Stracotto al Chianti Classico and celebrate in the best company, just the two of us.

But whilst we are all waiting and hoping for our lives to turn back to normality, here are a few propositions that I particularly like using ingredients that are hopefully easy to get:

~ a cannellini bean salad with tuna and red onions that I had once in Florence and it has stolen my stomach since the first bite;

~ an artichoke, sweet pear and shaved pecorino (sheepâs milk) cheese salad, there is a loose saying that I came across in one of the books ânot to tell the farmer how good the concoction of pears and pecorino is otherwise they will stop selling it to you and keep all for themselvesâ

~ a creamy chickpea and rosemary soup;

~ gnudi (ricotta and spinach dumplings ) in a saffron and asparagus sauce; 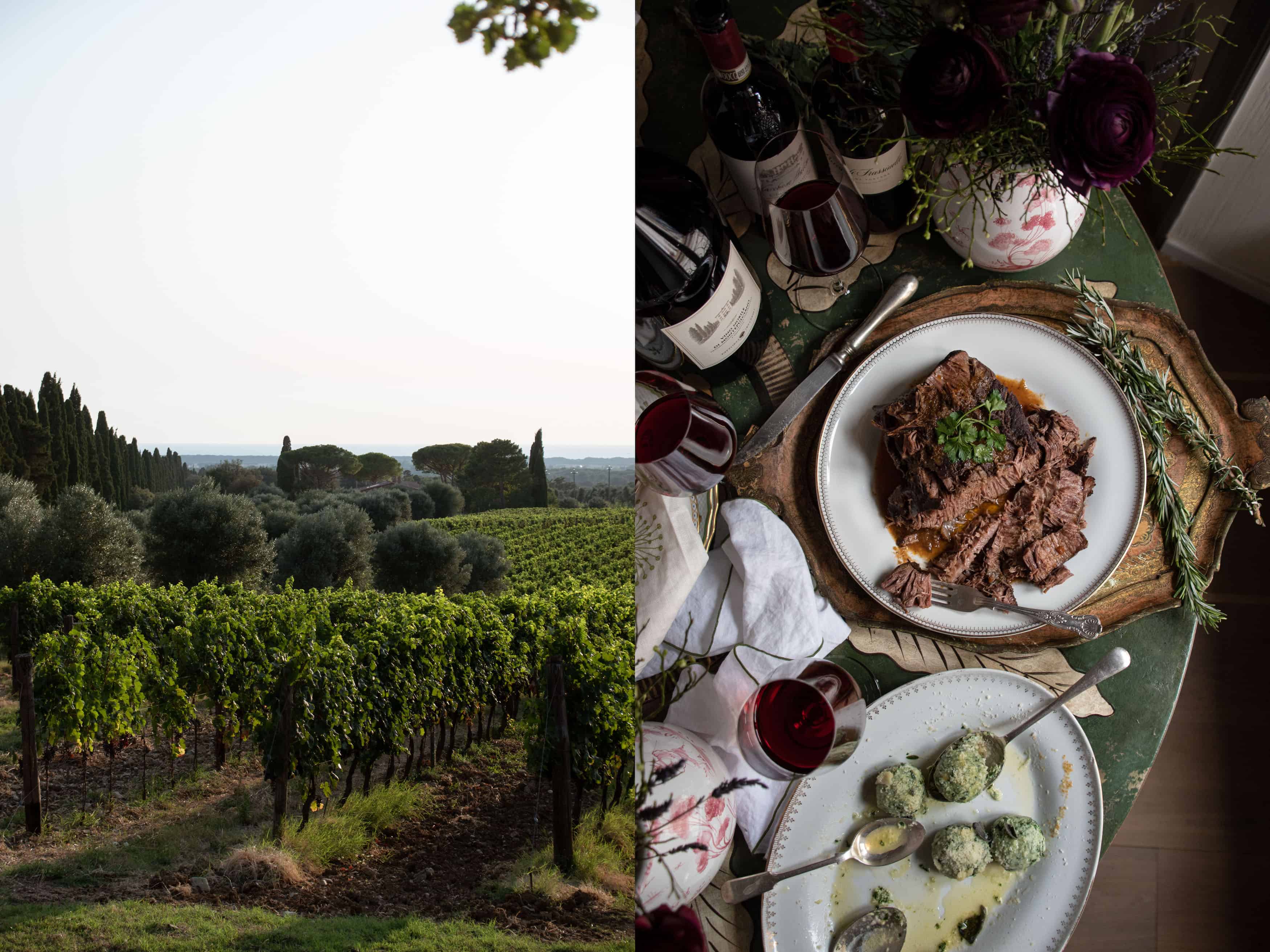