Wash the leaves carefully and cut off any hard stems.

Bring a large pot of water to the boil, add some salt and after that the spinach leaves.Â

Boil them for a few minutes until they start turning soft (for the spinach about 2 minutes should be enough). Once the leaves have turned soft, drain them in a colander and run cold water over them. Toss the cooked leaves and check if they are cold.

Wait a few minutes allowing the water to drain from the leaves. Now squeeze out very well the remaining liquid with your hands. You can now roughly chop the boiled spinach leaves.

In a large bowl mix the ricotta cheese, chopped spinach, parmesan and one egg. Once the ingredients are well combined season with some nutmeg, salt and pepper to taste. Â

Prepare the gnudi by taking with a tablespoon the ricotta and spinach mixture and rolling it in your palms into a small ball roughly the size of a walnut. In case the dough is too difficult to manage stir in some flour. I donât add more than one teaspoon (but in case the spinach leaves were too watery you might need more) and it is normal that the dough will stick a bit to your hands. Help yourself with some flour while rolling the gundi.

Place the prepared gnudi on a floured workspace.

Bring a large pot of salted water to the boil and cook the gundi until they rise to the surface. Scoop them out with a slotted spoon and place them on a serving plate.*

In the meantime prepare the saffron and asparagus sauce.

First wash and cut off any hard parts of the asparagus. Blanch them in a littleÂ  slightly salted water for about 3 minutes. They should still have some crunch into them. Drain and run under cold water for a few seconds. They tend to keep their lovely green colour that way.

Now slice the asparagus across into fairly thin rounds and start frying them gently in the butter. Stir the saffron into the cream and pour it into the pan with the asparagus.

After a few minuets add the grated pecorino, which should thicken the sauce.

Once the pecorino has melted taste the sauce and add some black pepper and salt if needed.

Pour the warm saffron and asparagus sauce first onto one large or a few smaller serving plates.

Place the gnudi as soon as they cook on the plate* with the sauce.

Decorate with the pecorino cheese shavings. 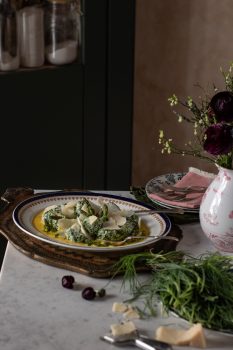