Better still make your own pasta using 2 eggs and 200 grams of flour. Roll it out using a pasta machine (I tend to stop at number 6-7) and cut into rectangles. Donât worry if the pasta rectangles are not all of exactly the same size. They should be slightly overlapping whilst assembling the dish and smaller pieces are perfect for filling in the gaps.Â

Personally I prefer to boil my pasta first for a few minutes, drain and cool it down before putting the dish together for baking. By doing so it absorbs less of the moisture from the sauce.

Wash and roughly chop the radicchio.

In a pan heat up a couple of tablespoons of olive oil.Â

Add the radicchio to the pan and fry on a medium heat stirring frequently. Once the radicchio leaves have softened a bit you can pour over a splash of red wine and wait until it evaporates. Otherwise carry on frying the same way until the the leaves and stems turn soft as well as the released juices have evaporated. Taste and adjust with a little salt (if needed) and black pepper.

Melt the butter in a saucepan on a medium heat. Add the flour, stir well and fry the mixture (called roux) for a couple of minutes stirring all the time. The aim is to cook the flour a bit before adding the milk. It will be easier to digest and it will release some nutty notes.

Start gradually pouring in the milk (while stirring all the time). Little by little making sure that you have incorporated it very well with a wooden spoon or a whisk to the roux before adding more milk. This way you will avoid having undesirable lumps in the sauce.Â

Lower the heat down a bit and cook the bÃ©chamel stirring slowly until the sauce starts to thicken and bubble gently. Whilst cooking season your sauce with a few pinches of grated nutmeg and enough salt to offset the sweetness of the milk.

To assemble the dish:

Spread about two to three tablespoons of the bÃ©chamel sauce over the base of the ovenproof dish, roughly 18 x 25 cm in which you will be baking your lasagne.

Cover it with a single layer of the pasta sheets. They can be overlapping and in case you need to fill in any gaps cut a spare pasta sheet into smaller pieces and arrange them neatly where needed.

Spread half of the prepared radicchio filling over the pasta and scatter over one handful of walnuts. Cover evenly with half of the grated Fontina cheese.

Spread about a third of the bÃ©chamel sauce over the radicchio and Fontina cheese layer and scatter over two tablespoons of grated parmesan.

Cover everything with the second layer of the pasta sheets the same way as before.

Repeat the same process of arranging the radicchio, walnuts and Fontina with the bÃ©chamel and parmesan to follow.

Use the remaining pasta sheets to create the final layer. Spread evenly the reaming bÃ©chamel all over the pasta and scatter over the last two tablespoons of the parmesan.

Bake in a preheated fan assisted oven to 175-180C (200 C if baking in a conventional oven) for about 25-30 minutes, until the dish turns deliciously golden and bubbly on top. 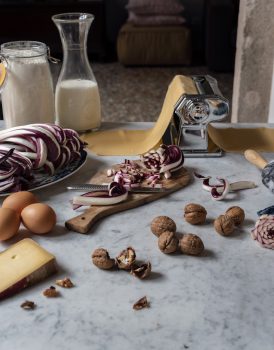