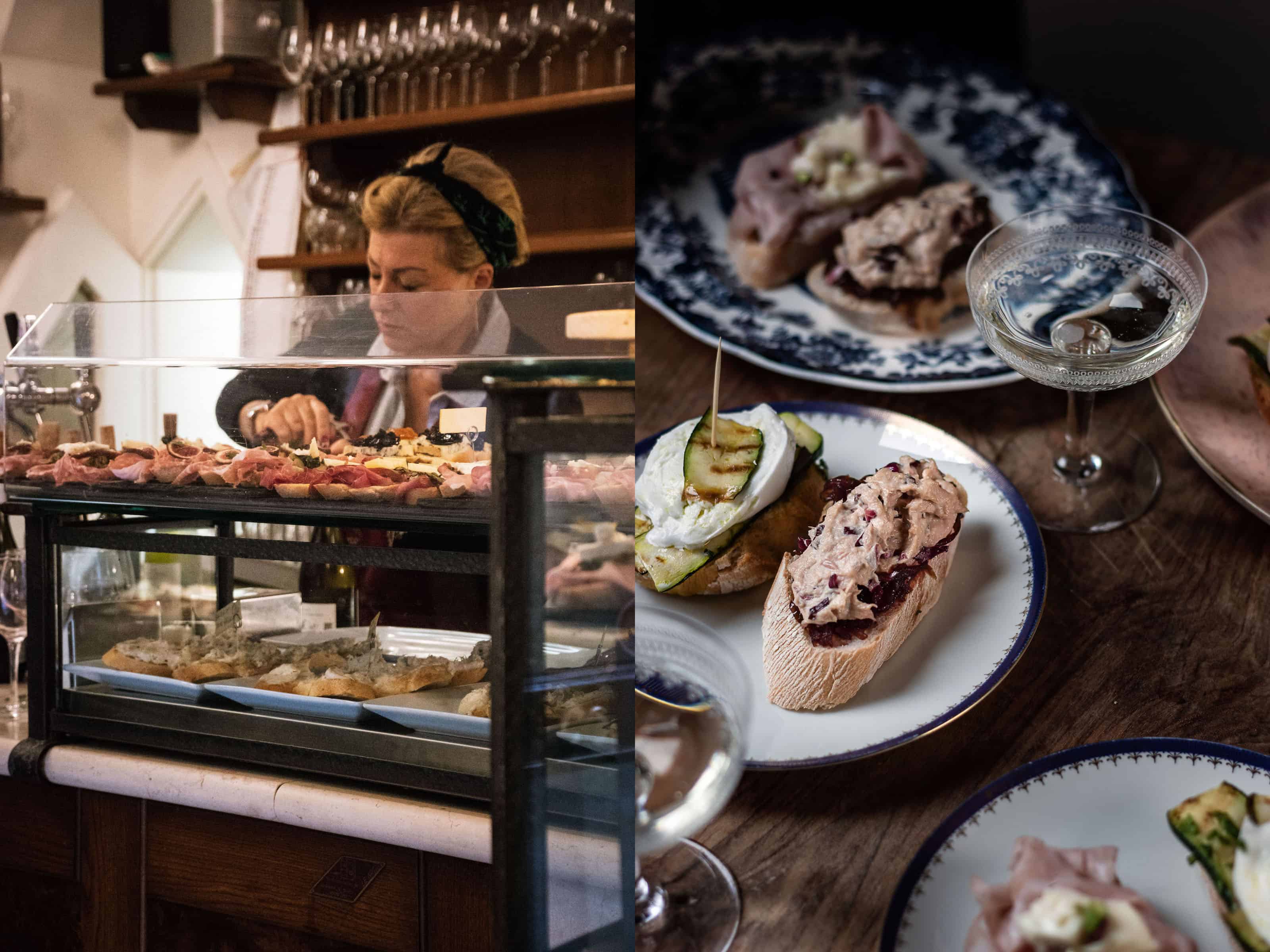 Bacaro, a social hub, a casual meeting point for locals, academics, students, shop keepers, gondoliers, tourists. Perhaps one could call it a Venetian osteria with a less formal feel to it. In fact, itâs not formal at all. You will be lucky to find a chair and a table to sit down. It is itâs countertop laden with chicchetti (cichÃ¨ti in Venetian spelling) and a vast choice of wines served by the glass which makes for the perfect formula of a cosy welcoming and relaxed atmosphere.

Cicchetti are very creative and delicious little snacks of which most bacari have a vast selection.

Most popular cicchetti are crostini: sliced crunchy bread (usually baguette) topped with what takes your fancy or as far as your imagination can go. There is little cooking involved, ingredients are deliciously assembled on the bread making them irresistible (especially when served on a toasted bread, a particular favourite of mine).

When looking at the cicchetti, piled on the boards or platters, you cannot not notice the pride, finesse and art involved in preparing them.

If âgoing for chicchettiâ will be a part of your visit to Venice (and I hope it will), the one with BaccalÃ  Mantecato is a must try.Itâs a staple here. The subtle paste is made by pounding boiled and flaked salt cod with olive oil until creamy. It is very often mixed with garlic or mushrooms. Take your pick. 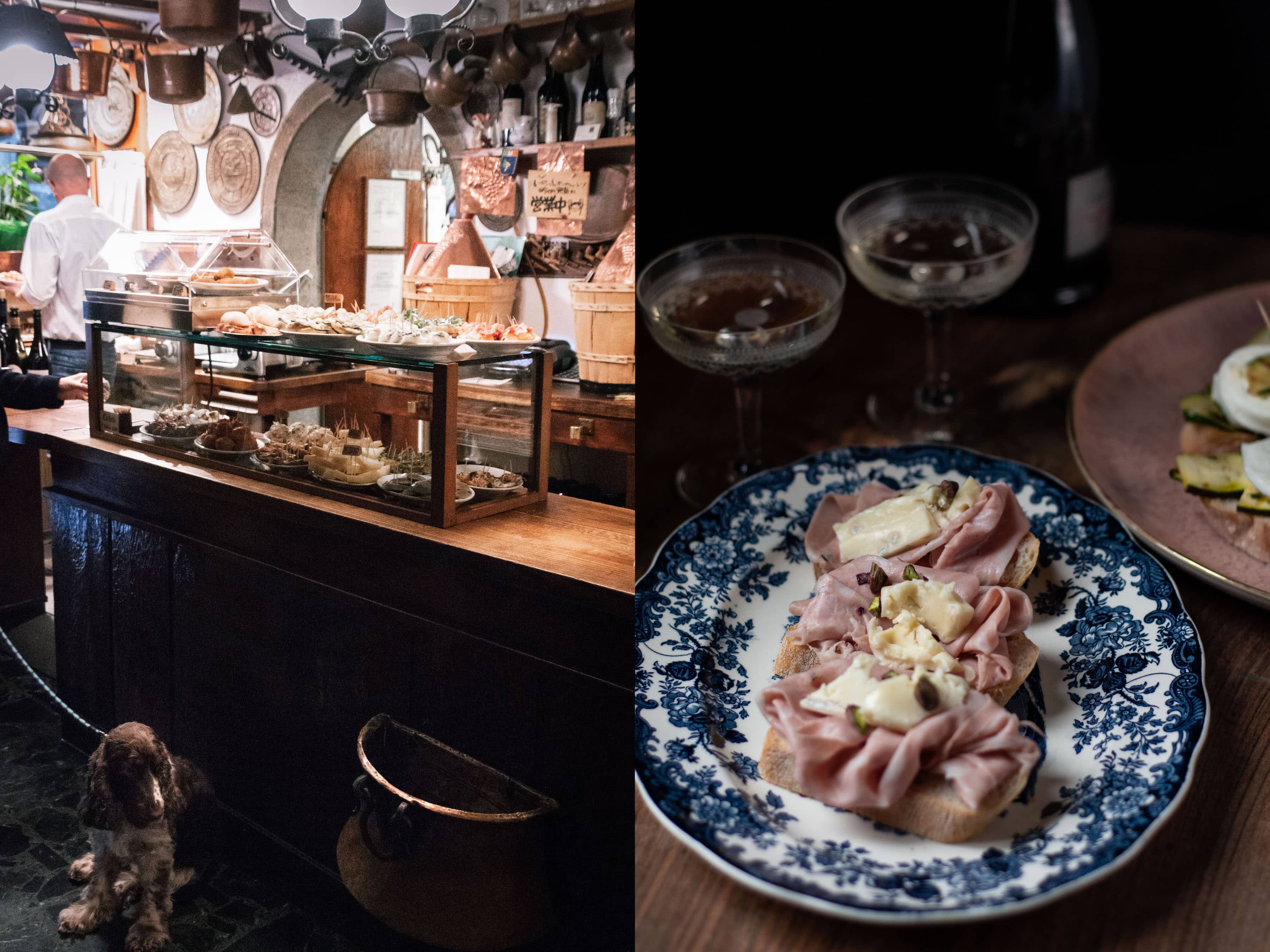 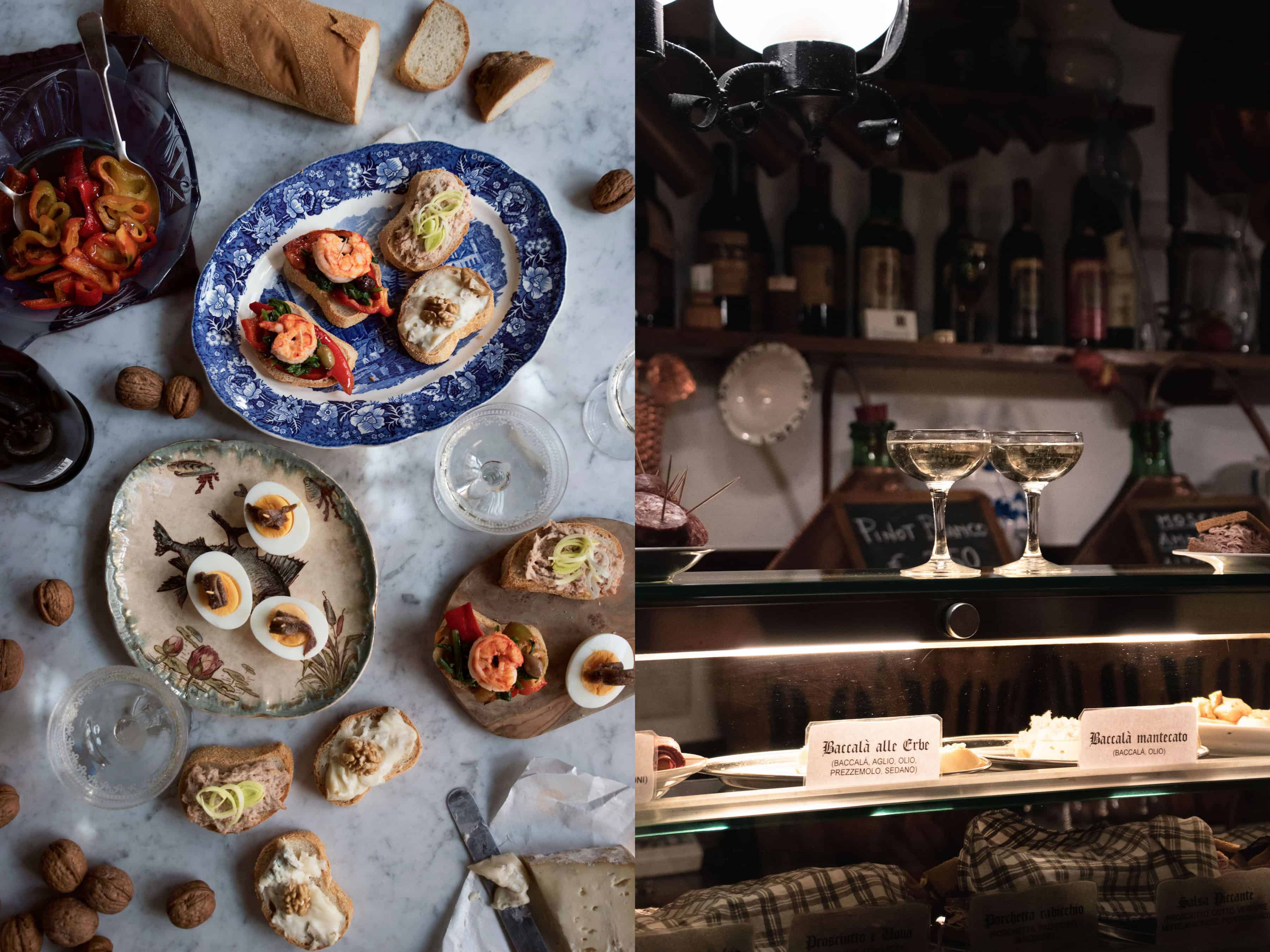 Apart from crostini, cicchetti are also served as a small portion of an octopus salad, sarde in soar, moscardini (these usually will be reheated), a boiled egg garnished with an anchovy, fondi di carciofi (the artichoke hearts cooked with garlic, parsley and white wine), a generous chunk of a local cheese or mortadella. And there are also meatballs.Venice to me feels almost like the capital of meatballs, or any balls: vegetarian, seafood or fish (mainly with tuna). Nothing beats very moreish deep fried warm meatballs, wonderfully crunchy from the outside and soft inside. And that is what we have most often at âAlla Vedovaâ. A bacaro hidden in a dark ally where you stop (or aim for) for cichÃ¨ti but you can also sit down to a proper meal a la carte.

An equally important part of the entire experience is to wash you snacks down with a glass of Prosecco, red wine or the internationally famous by now, Spritz.

Of course I have my favourite bacari and a selection of chicchetti by now and occasionally I make them for us at home, especially now during the second lockdown.
Below I have put up a few very simple ideas and guidelines (where the quantities of the ingredients are entirely of your choice and preference) to follow for crostini and a recipe for our very favourite homemade fennel meatballs. The recipes for âgamberi in soarâ and âfondi di carciofiâ you can already find on the blog (just click on the green print).

I truly hope that you will enjoy the experience.

– sliced lengthways red and yellow peppers, grilled then drizzled with olive oil and a splash of white wine vinegar, left to marinate for a few hours or preferably overnight

– some spinach leaves, wilted in a pan with a dash of olive oil and crushed garlic, seasoned with salt and pepper

– prawns (cleaned and peeled), pan fried on both sides with some olive oil, finely chopped garlic and parsley

Assemble all the above ingredients on the sliced bread, drizzle with extra olive oil and season with some salt and pepper.

Put the drained tuna in a bowl. Separate it into smaller pieces with a fork and mix with the mayonnaise until obtaining a paste. Taste and season with some black pepper.
Spread the paste onto the sliced bread and decorate with a few rings of freshly sliced leek.

Lay marinated courgette slices on the bread, place a slice of mozzarella on top or little mozzarella ball, garnish with a smaller slice of courgette and secure everything with the toothpick. Season with some salt and black pepper.

– a splash of red wine vinegar

– some water if needed

– horseradish: either freshly grated or from a jar

To caramelise the onions:

Place the onions in a pan, sprinkle with sugar and drizzle with some olive oil and allow to sweat gently on a low heat stirring occasionally. Be patient with the onions and donât be tempted to put the heat up. When the onions turn soft drizzle them with a little of the vinegar. Give it a stir and carry on cooking until they almost fall apart. Pour in some water whilst cooking if they turn dry stopping them from burning. Once you are happy with the onions take the pan off the heat and allow to cool down a little.

Put the drained tuna in a bowl. Separate it into smaller pieces with a fork and mix with the mayonnaise until obtaining a paste. Start adding the horseradish, either from a jar or freshly grated. Keep on tasting and add more mayonnaise and horseradish to your liking. Finally season with some pepper and stir in the radicchio if using.

Spread a layer of caramelised onions on the bread and cover with some tuna and horseradish paste.

– sliced crunchy bread, my subtle suggestion is to toast it first and drizzle with some olive oil

– Gorgonzola Dolce cheese, or any other blue cheese perhaps mixed with mascarpone in order to obtain a creamier and milder version

Place a large slice of thinly sliced mortadella in a decorative way on your bread. Top it with some Gorgonzola cheese and garnish with pistachios. 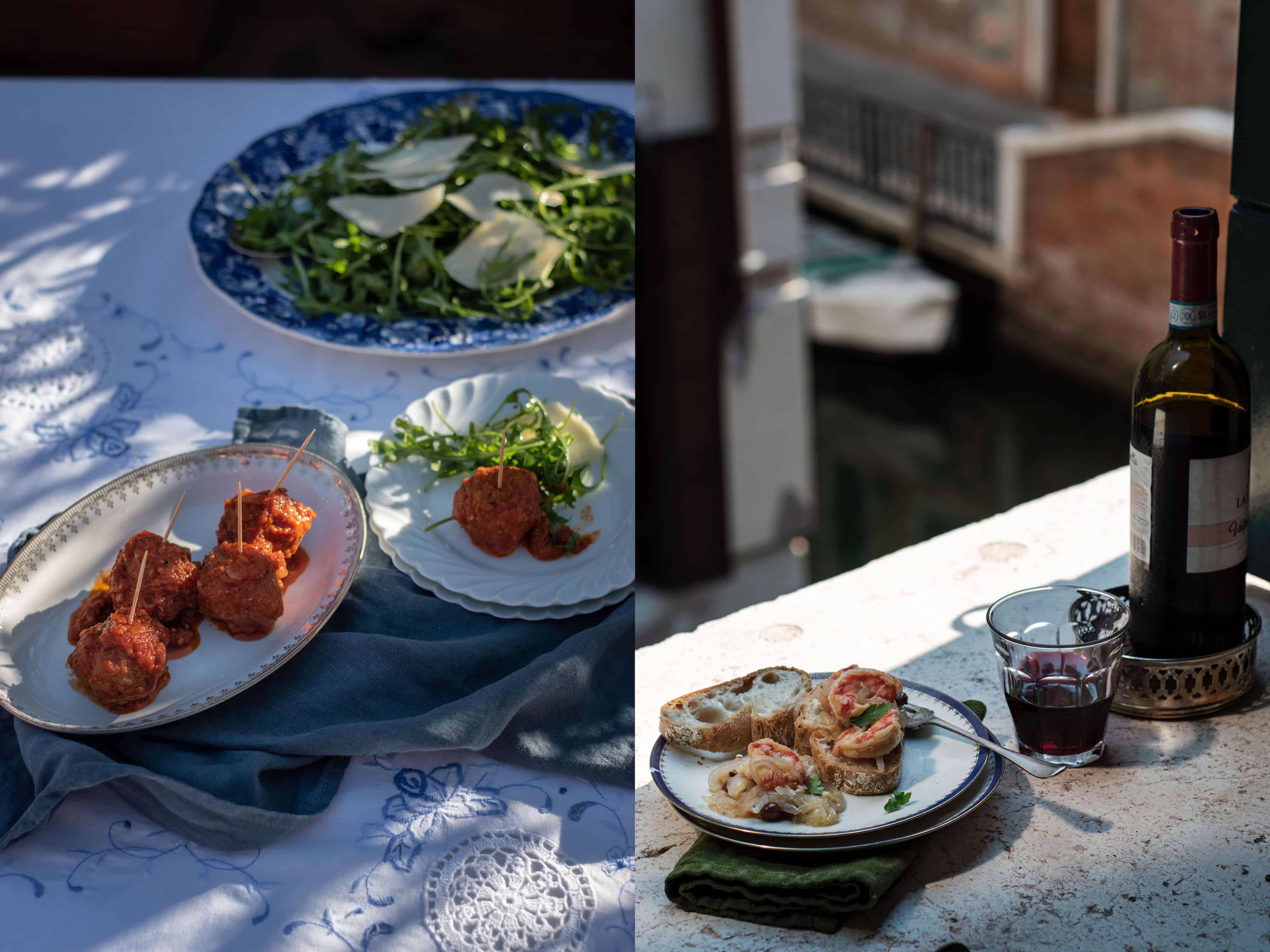 The inspiration and a loose adaptation of this dish came from the book âPolpoâ.

The meatballs can be served as cicchetti, just stick a toothpick into individual meatballs.
Otherwise they make for a delicious meal on their own accompanied by a rocket salad with shaved parmesan and perhaps some crunchy bread on a side.

– a few pinches of salt

– a few pinches of black pepper

For the tomato sauce:

– a tip of a teaspoon of sugar

– salt and black pepper to taste

Begin with the sauce:In a large pot heat up the olive oil, add the chopped onion and fry for about 5 minutes. Next add the garlic as well as the chilli and fry all together until the onion turns translucent.
Pour in the passata, season with the oregano, sugar, salt and pepper. Give it a stir and let it bubble away on a low to medium heat without the lid. Add more salt if needed and stir occasionally.

Whilst the sauce simmers on the stove, make the meatballs.

In a hot pan toast the fennel seeds along with the chilli pepper or chilli flakes for a few minutes. Shake the pan often and be careful not to burn the spices. Once you notice that the seeds start to release their aroma, switch the heat off. Wait for a few minutes and grind the spices using mortar and pestle (or a coffe/ spice grinder).

Roll in your hands small balls, more or less the size of a walnut, and put them directly, one by one, into the pot with the simmering sauce.