InsalataÂ  di Rinforzo in other words: Reinforcing Salad takes itâs name from the belief of being reinvigorating. It is based on a boiled or steamed cauliflower and pickled vegetables, in Italy simply called âLa Gardinieraâ.Â

You should leave the salad in the fridge for a few hours allowing for the individual flavours to permeate and then bring it to the room temperature before serving.Â

I actually like eating it almost immediately whilst the cauliflower is still slightly warm enhancing the aromatic notes of the olive oil.Â

Recently I reacquainted myself with my griddle pan and for this salad I like to grill sliced and brushed with olive oil peppers* and then drizzle them ever so slightly with red wine vinegar.

The quantities of the ingredients below are more of an indication and can be adjusted to your personal liking.

Boil the cauliflower florets in salted water until just tender. Donât boil it for too long, it should not be falling apart.

Drain and allow to cool down a little.

Place all the salad ingredients in a large bowl and mix gently.Â

Cover generously with olive oil, some vinegar (not too much) and season with a pinch of salt.

Toss everything again and leave covered in a fridge for a few hours.

Bring to room temperature, taste and season again (if there is a need for it)Â  before serving. 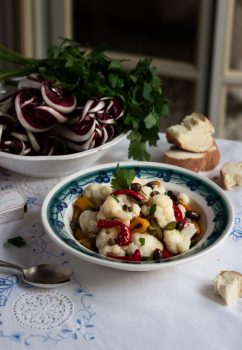