Iâve always loved roast potatoes and for a very long time I was just popping them quartered in the oven accompanied by some garlic, rosemary and occasionally an onion. That was until Iâve tried a different way of making them, for which the recipe you can find below.

As with most baked dishes this one too may look very unassuming and modest. But believe me when I tell you, that this is a perfect example of putting together two basic ingredients and transforming them into a more extravagant and delicious comfort food example.

Start with preparing the leeks.

In a deep pan heat up 2-3 tablespoons of olive oil along with one tablespoon of butter.

Add the leeks, season them with some salt and fry gently for about 10 minutes (stirring them occasionally) or until softened.

Grease with olive oil or butter the base of an oven proof dish 26×20 cm (or similar).

Use half of the sliced potatoes and lay them neatly in the dish. The slices should overlap.

Season with some salt and pepper.

Next spread the prepared leaks on top of the potatoes and even out the surface. Cover the leeks with a layer of parmesan (use half of the quantity).

Arrange snugly the final layer of the sliced potatoes on top, the same way as before.

Season with some salt and pepper. Scatter all over the remaining parmesan cheese and dot the surface with little pieces of the butter (about 20g).

for 25-30 minutes. After that check with a small sharp knife if the potatoes are soft.

Take the foil off and carry on baking until the top of the dish has turned crisp and dark golden in colour. 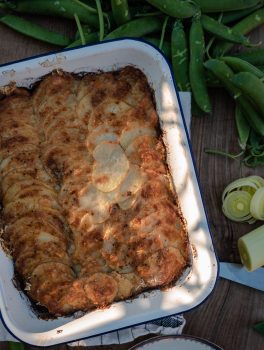