As much as I love chocolate, very rarely do I get excited about chocolate cakes. Most of the time I find them simply too dry.

Torta Tenerina al Cioccolato is one of those delicious chocolaty âpick me upâ treats that makes me fully happy and satisfied. It is slightly crunchy on the outside and soft inside, thanks to keeping the flour content to a minimum. I particularly enjoy it during the hot summer months, itâs like a balm to the soul, especially when chilled in the fridge. It sets slightly but by no means does it turn into an overly dense and heavy consistency.Â

Adding cherries and /or rosemary is optional, but it really adds this little umph to this otherwise simple chocolate cake.

Put the cherries in a small bowl and soak with the rum.

Whilst the cherries are soaking start melting the chocolate and the butter.

Set a heatproof bowl over a pan of gently simmering water, a bain marie, (use a small amount of water and make sure it doesn’t touch the base of the bowl).Â

Break the chocolate into pieces and put it into the bowl with the butter and allow to melt on a low heat stirring occasionally.Â

In a separate large bowl whisk the egg yolks with half the sugar until the mixture turns pale in colour.

Add the sifted flour and a pinch of salt and mix well.

Now is the time to add the melted chocolate mixture (be careful because the bowl used for the bain marie gets very hot). Pour a small quantity of the chocolate into the bowl containing the egg mixture and stir well. Gradually add the rest of the chocolate liquid whilst stirring all the time.

In the meantime whisk the egg whites until they form soft peaks, add the remaining sugar and carry on whisking until the sugar has fully dissolved.

Take a third of the egg whites and fold into the chocolate mixture. Gradually fold the rest of the egg whites until obtaining a uniform mixture (donât overwork it as you may lose the desirable air trapped in the whisked egg whites).

Now add the chopped rosemary and cherries (along with their liquid) and give the mixture a final stir.

Grease and line with a baking parchment a round loose bottomed baking tin, 22-24 cm in diameter.

Pour in the mixture and even out its surface.

DonâtÂ  be tempted to keep the cake too long in the oven, the whole idea is to keep it still moist inside.

Leave to cool down completely before handling.

Dust with the icing sugar moments before serving. A scoop of vanilla ice cream makes a perfect accompaniment and perhaps a few more ripe cherries. 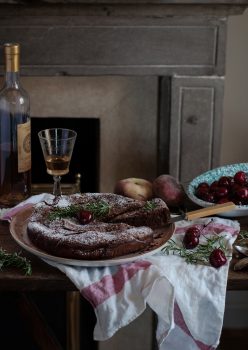